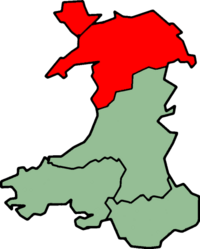 North Wales (Welsh: Gogledd Cymru) is the northernmost unofficial region of Wales. Retail, transport and educational infrastructure are centred on Wrexham, Rhyl, Colwyn Bay, Llandudno and Bangor. It is bordered to the south by the counties of Ceredigion and Powys in Mid Wales, and to the east by the counties of Shropshire in the West Midlands and Cheshire in North West England.

The southern boundary is arbitrary and its definition may depend on the use being made of the term. For example, the boundary of North Wales Police differs from the boundary of the North Wales area of the Natural Resources Wales and the North Wales Regional Transport Consortium (Taith). The historic boundary follows the pre 1996 county boundaries of Merionethshire and Denbighshire which in turn closely follows the geographic features of the river Dovey to Aran Fawddwy, then crossing the high moorlands following the watershed until reaching Cadair Berwyn, and then following the river Rhaeadr and river Tanat to the Shropshire border. Montgomeryshire is sometimes referred to as being in north Wales.

The region is steeped in history and was for almost a millennium known as the Kingdom of Gwynedd. The mountainous stronghold of Snowdonia formed the nucleus of that realm and would become the last redoubt of independent Wales — only overcome in 1283. To this day it remains a stronghold of the Welsh language and a centre for Welsh national and cultural identity.

The area is home to two of the three UNESCO World Heritage Sites in Wales. These are Pontcysyllte Aqueduct and canal and, collectively, the Edwardian castles and town walls of the region which comprise those at Caernarfon, Beaumaris, Conwy and Harlech. It also shares with Powys and Ceredigion the distinction of hosting the only UNESCO Biosphere (from Man and Biosphere (MAB) Programme to promote sustainable development) reserve in Wales, namely, Biosffer Dyfi Biosphere.

The region is made up of the following administrative areas:

In addition to the six Local Authority divisions, North Wales is also divided into the following preserved counties for various ceremonial purposes:

North Wales was a European Parliament constituency until 1999. Currently, there is an electoral region for the National Assembly for Wales with the name (used, in parallel with the smaller constituencies, to elect top-up members under the Additional Member System), which covers the north-east of Wales (specifically the entire area of the former pre-1996 county of Clwyd) as well as the Northern-most coastal areas of north-western Wales; the rest of North Wales is covered by Mid and West Wales. 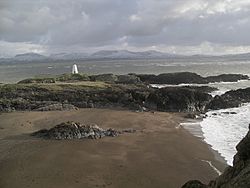 The area is mostly rural with many mountains and valleys. This, in combination with its coast (on the Irish Sea), has ensured that tourism is the principal industry. Farming, which was once the principal economic force in the area, is now much reduced in importance. The average income per capita of the local population is the lowest in the UK and much of the region has EU Objective 1 status.

The eastern part of North Wales contains the most populous areas, with more than 300,000 people living in the areas around Wrexham and Deeside. Wrexham is North Wales' largest town, with a population of 63,084 in 2001. The total population of North Wales is 687,937 (2011). The majority of other settlements are along the coast, including some popular resort towns, such as Rhyl, Llandudno and Pwllheli. The A55 road links these towns to cities like Manchester, Liverpool and Birmingham and the port of Holyhead for ferries to Ireland; few routes connect North Wales with South Wales. There are two cathedral cities – Bangor and St. Asaph – and a number of mediaeval castles (e.g., Criccieth, Dolbadarn, Dolwyddelan, Harlech, Caernarfon Castle, Beaumaris, Conwy) The area of North Wales is about 6,172 square kilometres, making it slightly larger than the country of Brunei, or the island of Bali.

The highest mountain in Wales, (and also higher than anywhere in England or Ireland), Snowdon, is situated in north west Wales.

North Wales has a very diverse and complex geology with Precambrian schists along the Menai Strait and the great Cambrian dome behind Harlech and underlying much of western Snowdonia. In the Ordovician period much volcanism deposited a range of minerals and rocks over the north western parts of Gwynedd whilst to the east of the River Conwy lies a large area of upland rolling hills underlain by the Silurian mudstones and grits comprising the Denbigh and Migneint Moors. To the east, around Llangollen, to the north on Halkyn Mountain and the Great Orme and in eastern Anglesey are beds of limestone from which metals have been mined since pre-Roman times. Added to all this are the complexities posed by Parys Mountain and the outcrops of unusual minerals such as Jasper and Mona Marble which make the area of special interest to geologists.

North Wales has a distinct regional identity. Its dialect of the Welsh language differs from that of other regions such as South Wales in some ways: for example llefrith is used in most of the North instead of llaeth for "milk"; a simple sentence such as go upstairs now might be Dos i fyny'r grisiau rŵan in North Wales, and Cer lan y stâr nawr in South Wales. Colloquially, a person from North Wales (especially one who speaks with this dialect or accent) is known as a North Walian, or a Gog (from the Welsh gogledd, meaning "north"). Areas close to the border with Cheshire can have Scouse accents of English, and along the coast Manchester accents are common.

All content from Kiddle encyclopedia articles (including the article images and facts) can be freely used under Attribution-ShareAlike license, unless stated otherwise. Cite this article:
North Wales Facts for Kids. Kiddle Encyclopedia.