Kids Encyclopedia Facts
This page is about the city. For the person, see Saint Asaph.

St Asaph ( Welsh: Llanelwy "church on the Elwy") is a city and community on the River Elwy in Denbighshire, Wales. In the 2011 Census it had a population of 3,355 making it the second-smallest city in Britain in terms of population and urban area. It is in the historic county of Flintshire.

The city of St Asaph is surrounded by countryside and views of the Vale of Clwyd. It is situated close to a number of busy coastal towns such as Rhyl, Prestatyn, Abergele, Colwyn Bay and Llandudno. The historic castles of Denbigh and Rhuddlan are also nearby

The earliest inhabitants of the vale of Elwy lived at the nearby Paleolithic site of Pontnewydd (Bontnewydd), which was excavated from 1978 by a team from the University of Wales, led by Dr Stephen Aldhouse Green. Teeth and part of a jawbone excavated in 1981 were dated to 225,000 years ago. This site is the most north-western site in Eurasia for remains of early hominids and is considered of international importance. Based on the morphology and age of the teeth, particularly the evidence of taurodontism, the teeth are believed to belong to a group of Neanderthals who hunted game in the vale of Elwy in an interglacial period. 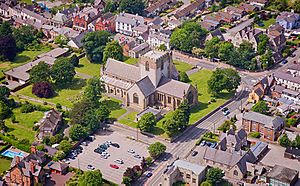 Aerial view of the cathedral.

Later some historians postulate that the Roman fort of Varae sat on the site of the Cathedral. However, the city is believed to have developed around a 6th-century Celtic monastery founded by Saint Kentigern, and is now home to the small 14th century St Asaph Cathedral. This is dedicated to Saint Asaph (also spelt in Welsh as Asaff), its second bishop.

The Cathedral has had a chequered history. In the 13th century, the troops of Edward I of England burnt the cathedral almost to the ground, and in 1402 Owain Glyndŵr's troops went on the rampage, causing severe damage to the furnishings and fittings. Two hundred and fifty years later, during the Commonwealth, the building was used to house farm animals: pigs, cattle and horses.

The Laws in Wales Act 1535 placed St Asaph in Denbighshire. However, in 1542 St Asaph was placed in Flintshire for voting purposes. Between 1 April 1974 and 1 April 1996 it was part of non-metropolitan Clwyd.

As the seat of an ancient cathedral and diocese, St Asaph was historically regarded as a city, and the 1911 Encyclopædia Britannica refers to it as a city on that basis; by the end of the 20th century the relationship between possessing a cathedral and automatic entitlement to city status had been broken, and the town was no longer regarded as a city. The town applied for restoration of city status in competitions held by the British government in 2000 (for the Millennium) and 2002 (Queen's Golden Jubilee) but was unsuccessful. In 2012 it again competed for city status during the Queen's Diamond Jubilee celebrations. It was announced on 14 March 2012 that the application was successful, and city status was to be bestowed upon St Asaph alongside Chelmsford and Perth. The status was formally granted by letters patent dated 1 June 2012.

Despite the previous lack of official city status, the community council had referred to itself as the City of St Asaph Town Council. The local community is passionate about St Asaph's historic claim to be known as a city like its Welsh cousin St David's, which has led to a number of local businesses using 'City' as part of their business name. The city is promoted locally as the "City of Music".

The past few decades have seen the local economy in St Asaph thrive, first with the opening of the A55 road in 1970, which took east/west traffic away from the city, and, more recently, with a business park being built, attracting investment from home and overseas.

The crowded roads in St Asaph have been a hot political issue for many years. In recent years, increasing volumes of traffic on the A525, St Asaph High Street, which links A55 with the Clwyd Valley, Denbigh and Ruthin, have led to severe congestion in the city. This congestion is having a detrimental effect on the city, and residents have repeatedly called for a bypass to take this north/south road and its traffic away from the city, but the National Assembly for Wales rejected these calls in 2004, presenting a further setback for residents campaigning on the issue.

St Asaph is twinned with the town of Bégard in Brittany, France. Both organise annual trips to the other for their residents.

Every year the city hosts the North Wales International Music Festival, which takes place at several venues in the city and attracts musicians and music lovers from all over Wales and beyond. In past years, the main event in September at the cathedral has been covered on television by the BBC.

Other annual events in the city include the increasingly popular Woodfest Wales crafts festival in June, the Beat the Bounds charity walk in July and the Gala Day in August.

St. Asaph is served by regular buses to Denbigh, Rhuddlan and Rhyl. The city was once served by a station on the Vale of Clwyd Railway line, which closed in the 1960s. However, the station remains and the site is now in use as a timber yard. The nearest stations are now in Rhyl and Pensarn.

Although further away, other stations in the vicinity of the city include Flint, Shotton, Wrexham and Ruabon. Llangollen Railway is also a nearby tourist attraction in nearby Corwen, as is Bala Lake Railway in the town of Bala.

A number of famous people have strong links to St Asaph, having been born, raised, lived, worked or died in the city. These include:

Another well-known individual, Geoffrey of Monmouth, served as Lord Bishop of St Asaph from 1152 to 1155. However, due to war and unrest in Wales at the time, he probably never set foot in his see.

The hospital in the city (formerly the St Asaph Union Workhouse) was named H.M. Stanley Hospital in honour of Sir Henry Morton Stanley; it closed in 2012. The city's hospice was named after Saint Kentigern.

All content from Kiddle encyclopedia articles (including the article images and facts) can be freely used under Attribution-ShareAlike license, unless stated otherwise. Cite this article:
St Asaph Facts for Kids. Kiddle Encyclopedia.