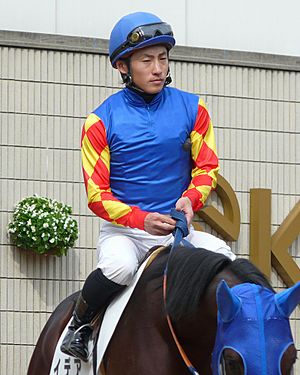 A jockey is someone who rides horses in horse racing or steeplechase racing, primarily as a profession. The word also applies to camel riders in camel racing. 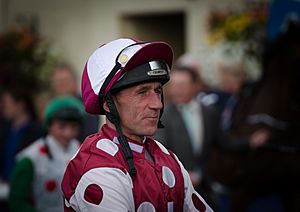 Jockeys must be light to ride at the weights which are assigned to their mounts. There are horse carrying weight limits, that are set by racing authorities. The Kentucky Derby, for example, has a weight limit of 126 lb (57 kg) including the jockey's equipment. The weight of a jockey usually ranges from 108 to 118 lb (49 to 54 kg). Despite their light weight, they must be able to control a horse that is moving at 40 mph (64 km/h) and weighs 1,200 lb (540 kg). Though there is no height limit for jockeys, they are usually fairly short due to the weight limits. Jockeys typically stand around 4 ft 10 in (147 cm) to 5 ft 6 in (168 cm). 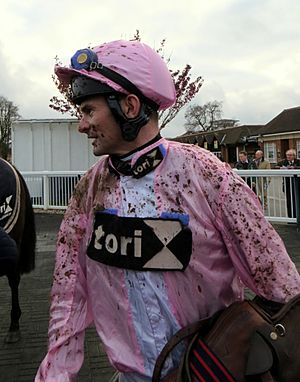 Muddy jockey after Light the World's race at Lingfield 2012

Jockeys are normally self employed, nominated by horse trainers to ride their horses in races, for a fee (which is paid regardless of the prize money the horse earns for a race) and a percentage of the winnings. When an apprentice jockey finishes their apprenticeship and becomes a "fully fledged jockey", the nature of their employment and insurance requirements change because they are regarded as "freelance", like contractors.

Jockeys often cease their riding careers to take up other employment in racing, usually as trainers. In this way the apprenticeship system serves to induct young people into racing employment.

Jockeys usually start out when they are young, riding work in the morning for trainers, and entering the riding profession as apprentice jockeys. It is normally necessary for an apprentice jockey to ride a minimum of about 20 barrier trials successfully before being permitted to ride in races.

An apprentice jockey is known as a "bug boy" because the asterisk that follows the name in the program looks like a bug. All jockeys must be licensed and usually are not permitted to bet on a race. After a four-year indentured apprenticeship, the apprentice becomes a senior jockey and usually develops relationships with trainers and individual horses. Sometimes senior jockeys are paid a retainer by an owner which gives the owner the right to insist the jockey ride their horses in races.

Racing modeled on the English Jockey Club spread throughout the world with colonial expansion. 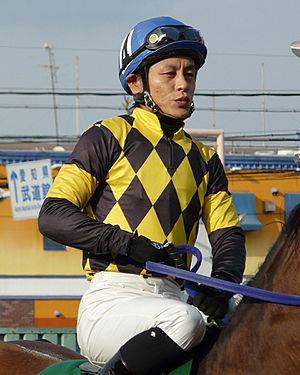 The colors worn by jockeys in races are the registered "colors" of the owner or trainer who employs them. The practice of riders wearing colors probably stems from medieval times when jousts were held between knights. However, the origins of racing colors of various patterns may have been influenced by racing held in Italian city communities since medieval times. Such traditional events are still held on town streets and are known for furious riding and the colorful spectacle they offer.

While the term "silks" is used in the United States to refer to racing colors, technically "silks" are the white breeches and bib or cravat (neck scarf). Obtaining them is a rite of passage when a jockey is first able to don silken pants and colors in their first race ride. At one time silks were invariably made of silk chosen for being a lightweight fabric, though now synthetics are used instead. Silks and their colors are important symbols of loyalty and festivity.

All content from Kiddle encyclopedia articles (including the article images and facts) can be freely used under Attribution-ShareAlike license, unless stated otherwise. Cite this article:
Jockey Facts for Kids. Kiddle Encyclopedia.