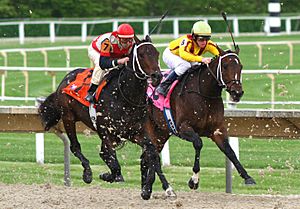 Important races outside the US include Longchamp near Paris, the Dubai Gold Cup and the Melbourne Cup, held every year in Australia on the second Tuesday of November. Heralded as "the race that stops the nation," this one race alone keeps hatmakers in the city of Melbourne in business for an entire year. Every year, during the cup, over 11 million people from Australia and New Zealand tune in to listen to the race, starting at 3:00pm.

All content from Kiddle encyclopedia articles (including the article images and facts) can be freely used under Attribution-ShareAlike license, unless stated otherwise. Cite this article:
Horse racing Facts for Kids. Kiddle Encyclopedia.