Ascot is a small town in East Berkshire, England, 6 miles (9.7 km) south of Windsor, 4 miles (6.4 km) east of Bracknell and 25 miles (40 km) west of London. It is most notable as the location of Ascot Racecourse, home of the prestigious Royal Ascot meeting. The town comprises three areas: Ascot itself, North Ascot and South Ascot. It is in the civil parish of Sunninghill and Ascot.

Facilities tend to be geared towards the racecourse, but there is a small range of shops in the wide High Street. Most of the expected facilities one would expect to find in a small town are here, including a supermarket, petrol station and many cafes (including a Starbucks and a Costa, a Subway, Tesco Express and Budgens). Most buildings are post-war with flats above the ground floor retail space. Heatherwood Hospital (filming location for Carry on Matron) was at the western edge of the town. Ascot has a station on a bi-section of the railway line from London Waterloo to Reading, Bagshot, Aldershot and Guildford, originally built by the London and South Western Railway and now operated by South West Trains. As a consequence of the frequent service on this line, Ascot is now a commuter centre with its residents in both directions (westwards to Reading and eastwards to London). 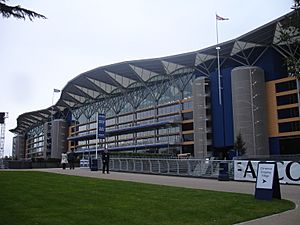 The new grandstand at Royal Ascot

The centrepiece of Ascot's year is held in June: Royal Ascot is without doubt the world's most famous race meeting, steeped in history dating back to 1711. The royal family attend the meeting, arriving each day in a horse-drawn carriage. It is a major event in the British social calendar. Although this has placed Ascot onto the British social map, it has many direct effects on the local community, not least of which are the associated traffic problems. The course is still owned by the crown.

All content from Kiddle encyclopedia articles (including the article images and facts) can be freely used under Attribution-ShareAlike license, unless stated otherwise. Cite this article:
Ascot, Berkshire Facts for Kids. Kiddle Encyclopedia.