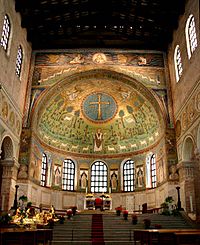 In architecture, the apse (from Latin apsis: "arch, vault") is a semicircular recess covered with a hemispherical vault or semi-dome. It is similar to another form known as an exedra. In Romanesque, Byzantine and Gothic Christian abbey, cathedral and church architecture, the term is applied to a semi-circular or polygonal termination of the main building. This is usually at the liturgical east end (where the altar is). It is also regardless of the shape of the roof, which may be flat, sloping, domed, or hemispherical.

All content from Kiddle encyclopedia articles (including the article images and facts) can be freely used under Attribution-ShareAlike license, unless stated otherwise. Cite this article:
Apse Facts for Kids. Kiddle Encyclopedia.