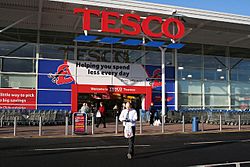 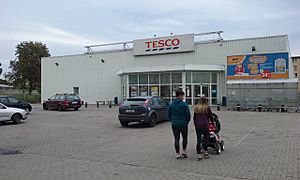 Tesco in sixty-thousandths of Tomaszów Mazowiecki in Poland

Tesco is a multinational retailer from the United Kingdom. It was started by in 1919 by Jack Cohen, who opened the first Tesco grocery store in 1931 near London, England. His business grew very quickly and there were 100 Tesco stores by 1939. At first, Tesco only sold food in its stores, but in the 1990s it began to sell other things like mobile phones, DVDs and videos, clothing, and books. It now also operates petrol stations, banks, and is an Internet service provider in the UK since 2012.

There are different brands of Tesco stores, which are all different sizes. They go from small convenience stores to large hypermarkets. With more than 3,000 stores in the UK alone, it is one of the biggest retailers in the country. Tesco's website was also one of the first to let people buy things from the Internet.

The company that owns Tesco is called Tesco plc (public limited company) and is listed on the London Stock Exchange. It has opened stores in other countries in Europe and Asia. Countries with Tesco stores include Ireland, Hungary, Malaysia, and Thailand. Today, Tesco is the third-largest retailer in the world when measured by profit and the fifth-largest by revenue.

All content from Kiddle encyclopedia articles (including the article images and facts) can be freely used under Attribution-ShareAlike license, unless stated otherwise. Cite this article:
Tesco Facts for Kids. Kiddle Encyclopedia.