Chatteris /ˈtʃætɛrɪs/ is a civil parish and one of four market towns in the Fenland district of Cambridgeshire, England, situated in The Fens between Huntingdon, March and Ely. The town is in the North East Cambridgeshire parliamentary constituency.

The parish of Chatteris is large, covering 6,099 hectares, and for much of its history was a raised island in the low-lying wetland of the Fens. Mentioned in the Domesday Book of 1086, the town has evidence of settlement from the Neolithic period. After several fires in the 18th and 19th centuries, the majority of the town's housing dates from the late Victorian period onwards, with the tower of the parish church the only medieval building remaining.

Following the draining of the Fens, beginning in the 17th century and completed in the 19th century, the town's economy has been based on agriculture and related industry. Due to its proximity to Cambridge, Huntingdon and Peterborough, the town has emerged as a commuter town. The town had a population of 10,453 at the time of the United Kingdom Census 2011.

Chatteris's name probably derives from the Celtic Cedrid – Ced meaning a wood and Rid, a ford, although it may also derive from "cader", meaning hill fort, suggesting a similar site to the nearby Stonea Camp. The town was mentioned in the Domesday Book as "Cetriz" and "Cateriz".

Archaeological evidence has been found of Neolithic, Bronze Age and Iron Age settlements in the area, and Chatteris possesses what has been interpreted as the only upstanding Neolithic boundaries in Fenland. Saxon evidence is less well preserved, although in 679, Hunna, the chaplain to Æthelthryth of Ely built a hermitage on Honey Hill. More apocryphically, Chatteris is reputed to have been the last refuge of Boudica as she fled from the Romans.

A privately owned 1847 watercolour of Park House before its demolition. Elements of the dissolved abbey can be seen in the walls, including Norman arches.

The miraculous story of the first known parishioner of the town, Bricstan, is documented in the Historia Ecclesiastica by the Chronicler Orderic Vitalis (1075 – c.1142). According to the legend, Bricstan was a pious free tenant from the town who had joined the monastery at Ely Cathedral in 1115 to begin training as a monk. However, he was accused of theft and imprisoned in London. The legend recounts that one night he had a vision of Saint Etheldreda coming towards him, and as if by a miracle, his heavy chains fell from him and he was shackled no longer. When he awoke from his dream, he discovered that this was indeed true and he was free of his chains. The wife of Henry I, Matilda of Scotland, heard of the miracle, and she assured herself that he was no rogue or thief, issued a writ of pardon and declared him a free man.

During the Medieval period, the town was dominated by Chatteris Abbey, a small Benedictine nunnery dedicated to St Mary, built in 980 by Alfwen the niece of King Edgar and one of only eight nunneries mentioned in the Domesday Book. Throughout its existence, the abbey was comparatively poor compared to other foundations, due to a lack of royal patronage and a consequent lack of tithe estates. As a result, the abbey survived the first wave of closures during the Dissolution of the Monasteries, but was surrendered to the king's commissioners in 1538, by which time there were eleven nuns in residence.

At this date fourteen local families still used the abbey church as parochial but this, unusually, did not save it from demolition, the parishioners being transferred to nearby St Peter and St Paul's Church in the area. It has been conjectured that due to the short space between them, the parish church may have been the abbey church, although Claire Breay's Cartulary of Chatteris Abbey discounts this idea, citing that historical documentation clearly defines two separate churches. A range of the cloister buildings survived as part of a mansion known as Park House. This was demolished in 1847 and the site has now completely vanished beneath streets and housing, although the "Park Streets" of Chatteris mark the boundary of its walls and several buildings contain stone originating from the abbey. A large portion of the town was destroyed by a great fire in 1310, which destroyed the nunnery and a large portion of the church, leaving only sections of the base of the tower. 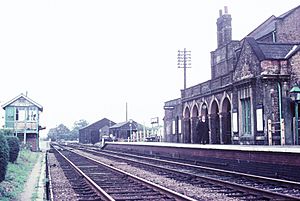 Chatteris Railway Station before closure in 1967. The station buildings no longer exist.

Later fires in 1706 and 1864 destroyed most medieval and Georgian architecture, and a large proportion of the town's listed buildings date from the Victorian period onwards. However, many of the pasture fields on the outskirts of the town have evidence of ridge and furrow farming practices, although these are under threat by current building proposals.

To the north of the town runs the Forty Foot Drain, a large river also called Vermuyden's Drain, after the Dutch engineer whose name is associated with the fen drainage works of the middle of the 17th century. Several of the older buildings of the town show evidence of the Dutch architectural style.

Chatteris is a market town and has possessed this designation since 1834, although an earlier market existed in the town, which was discontinued due to poor roads in 1808. A small market is still held every Friday. Following the Beeching Axe, Chatteris railway station, formerly on the St. Ives extension of the Great Eastern Railway was closed in March 1967.

Chatteris is situated between Huntingdon, St Ives, Peterborough, March and Ely, in the middle of The Fens—the lowest-lying area in the United Kingdom—with most of the land surrounding the town being below sea level, although the highest point in the Fens (36 feet above sea level) is within Chatteris's parish boundaries. The peaty land surrounding the town is largely used for agriculture, drained by numerous ditches and dykes, and there are two large drainage rivers near the town – the Forty Foot Drain, also known as Vermuyden's Drain, and the Sixteen Foot Drain.

Chatteris is a key turning point on the A141 road (known as the Isle of Ely way) and the starting point of the A142 road to Ely and Suffolk (known as Ireton's Way). The town also has important links to Cambridge and the A14 via the B1050 to Bar Hill. The town centre traffic was bypassed in 1986, with the disused route of the former St Ives extension of the Great Eastern Railway being used to build the A141 to March and Guyhirn.

There are no Met Office recording stations in the Fens, but an indication of rainfall and temperature of the county town Cambridge on the edge of the Fens shows that rainfall is below the national average, and in a wider study of East Anglia, the region had temperatures comparable with London, the warmest part of the UK.

The United Kingdom Census 2011 found the population of Chatteris to be 10,453. This was an increase of 1163 since 2001 which recorded 8,820 people living in 3,809 households, with the average number of people per dwelling 2.31. The 2001 census found that 98.9% of the population of the town were of the white ethnic group. The parish of Chatteris is large, covering 6,099 hectares, equalling an average population density of 1.45, although most of the dwellings are concentrated in a smaller area, the outskirts of the town consisting of farmland. 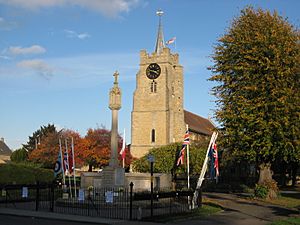 The parish church of St Peter & St Paul is situated in the centre of the town. A church has been on the site since at least 1162, although the current tower dates from 1352. The building had fallen into disrepair during the 19th century, and the majority of the building is the result of an intensive restoration in 1910. This included restoring a pitched roof and adding new aisles, although the nave arches are original. In 1935, a new two manual Harrison & Harrison organ was installed, a fine example of a pneumatic action instrument. Recent years have seen the construction of several new facilities, such as the Bricstan room extension. The church lists itself as being of the low church branch of the Church of England. The church also hosts the town's Catholic congregation.

The town's football club, Chatteris Town, was founded in 1920 and currently play in the Kershaw Premier Division of the Cambridgeshire Football Association County League. The town also has a cricket club, Chatteris Cricket Club, which was founded in 1879. The club has five senior teams and four youth teams that compete in both the Fenland and Cambridgeshire leagues. Chatteris CC won the St Ivo Midweek League in 2008 and 2009 going both seasons unbeaten. The town also has a bowls club and a tennis club (St Peters). Chatteris Airfield is about 2 kilometres (1.2 mi) north-northeast, which is mainly used for skydiving, and is the base of the North London Skydiving Centre. A flying school is also based at the airfield.

The town has one swimming pool, the Empress, which is privately owned and is a registered charity run by three trustees. It is open to members and can be booked for private hires or group sessions. It is home of the Chatteris Kingfishers swimming club, who after successes in 2008 compete in Division One of the 2009 "Cambs Cup" competition. Plans for a public swimming pool and leisure centre have been proposed by the council since 1990, but have yet to be approved. Proposals for the development of Cromwell Community College under the government's BSF programme include significant leisure provisions and these are expected to start in 2010. A new gym situated in the grounds of Cromwell Community College opened in 2013.

The town is noted for its annual display of Christmas lights, which are entirely funded by community donations and have been featured on BBC Look East. In 2008, a medieval-themed Historical Festival replaced the town's traditional festival week.

The town has a museum run by volunteers, with several permanent exhibitions about local history, the Fens, Victoriana and the Railways. Chatteris also has a Scout club, an Army Cadet force and a youth football team.

Chatteris has morning and evening Women's Institutes, which both meet at the King Edward Centre, and a Rotary Club which meet at the local fire station, and put on an annual firework display, plus other events in the town.

Chatteris in Bloom is a local charity that is responsible for entering the town in to the annual "Anglia in Bloom" competition. Chatteris has been awarded the following, along with a number of RHS It's Your Neighbourhood and other awards:

The town also has a brass band, founded in 1882, which competes in the East Anglian Brass Band Association.

In 2005, British indie band Half Man Half Biscuit – perhaps best known for "The Trumpton Riots" and "Dickie Davies Eyes" – included a song entitled "For What Is Chatteris..." on their award-winning Achtung Bono album. The song extolled the virtues of the town, offset against how unsatisfying the best place in the world can suddenly become when the one you love is no longer there: "a market town that lacks quintessence / that's Chatteris without your presence". News of the song made the headlines of the Cambridgeshire Times and the Peterborough Evening Telegraph during September 2005, a month before the album's official release.

A Chatteris fish and chip shop won the 2006 National Fish and Chip Shop of the Year competition. The Petrou Brothers owners were presented with the award by chef Ainsley Harriott.

Chatteris is well served by local bus routes, with regular buses to the nearby towns of March, St Ives, Ely and the city of Cambridge. There are also occasional services to Huntingdon and Peterborough.

The nearest railway stations are in March and Manea.

All content from Kiddle encyclopedia articles (including the article images and facts) can be freely used under Attribution-ShareAlike license, unless stated otherwise. Cite this article:
Chatteris Facts for Kids. Kiddle Encyclopedia.