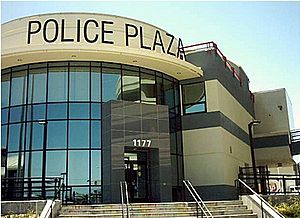 A police station is a building where police officers work. Other members of the law enforcement may work there as well. These buildings often contain offices and accommodation for staff. They also house equipment used by the police force, such as vehicles and weapons. Some police stations may have special rooms for interviewing people. Others may have small prison cells, where prisoners can be held temporarily before being moved to a proper prison.

All content from Kiddle encyclopedia articles (including the article images and facts) can be freely used under Attribution-ShareAlike license, unless stated otherwise. Cite this article:
Police station Facts for Kids. Kiddle Encyclopedia.