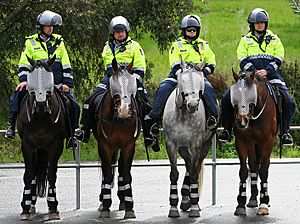 A police officer is a serving member of a police force. Police officers arrest criminals, prevent crime, protect and help the public, and keep public order. Officers have legally authorised powers, which in Britain is called a warrant. 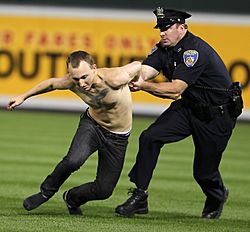 A Czech police officer keeping a close eye on traffic

As a part of their job, police officers have rights that a normal person does not have. This might include the power to arrest a person who they think has committed a crime, the power to search a person, the power to stop cars and direct traffic, the power to ask for a person's name and address, the power to give out tickets or fines or the power to make a person come to court. Without these powers the police would not be able to gain any sort of control over society.

Being a police officer can be dangerous. Police officers are sometimes killed or hurt by criminals when they are sent to incidents, so that is why the police have to carry the equipment needed to defend themselves. Police officers have the right to carry weapons, such as a gun or a baton in order to stop crime even if the weapon laws are strict and limited to the general public. 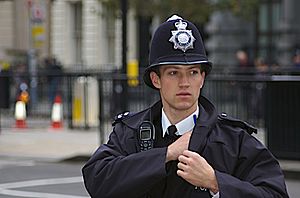 All content from Kiddle encyclopedia articles (including the article images and facts) can be freely used under Attribution-ShareAlike license, unless stated otherwise. Cite this article:
Police officer Facts for Kids. Kiddle Encyclopedia.