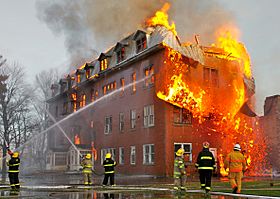 Firefighters at a major fire involving an abandoned convent in Canada, 2006

Firefighting is the act of trying to prevent the spread of and put out unwanted fires. The fires can be in buildings, vehicles, woodlands, and other places. A firefighter puts out fires to protect property, people and the environment.

Firefighters usually go through a lot of technical training. This includes fighting fires in buildings, cars and the woods.

One of the major hazards with firefighting is the poisonous environment made by things burning. Four major risks are smoke, oxygen deficiency, high temperatures and poisons in the air. To protect themselves from smoke, firefighters will wear a device called a breathing apparatus.

One way to put out fires is to spray them with water. The water does two things: it vaporizes when it comes in contact with fire. The water vapor leaves the fire with less oxygen, which it needs to keep burning. The other thing water does is make things cooler. That can keep the fire from burning because things will not burn if they are not hot enough.

All content from Kiddle encyclopedia articles (including the article images and facts) can be freely used under Attribution-ShareAlike license, unless stated otherwise. Cite this article:
Firefighting Facts for Kids. Kiddle Encyclopedia.