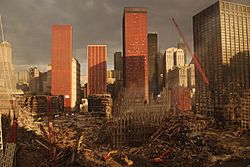 On the morning of September 11, 2001, two airplanes were captured by terrorists close to al-Qaeda and crashed into the Twin Towers, the North Tower and the South Tower, of the World Trade Center. The towers fell and were destroyed within two hours of the crashes. Nearly 3,000 people died in the attacks. After the attacks, hospital workers and police offers began calling the site "Ground Zero".

When the towers fell, they caused dust to spread in New York City, and left hundreds of thousands of tons of debris at the site. The New York City Fire Department separated the site into four areas to make cleanup of the site and the search for people who survived the attack easier. Early on, it was said that the debris at the site would take a year to get rid of, but cleanup ended in May 2002. Building materials and debris from Ground Zero were sent to the Fresh Kills Landfill in Staten Island.

In December 2001, a viewing area at Fulton Street, between Church Street and Broadway, was opened to the public. 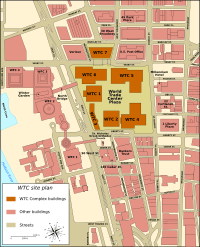 Above: The World Trade Center site before the September 11 attacks. 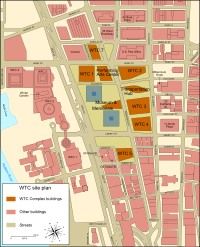 Above: First site plans for the World Trade Center rebuilding.

The new World Trade Center complex will have the following buildings:

Soon after the September 11 attacks, Mayor Rudy Giuliani, Governor George Pataki, and President George W. Bush said that they would rebuild the World Trade Center. On the day of the attacks, Giuliani said, "We will rebuild. We're going to come out of this stronger than before, politically stronger, economically stronger. The skyline will be made whole again." During a visit to the site on September 14, 2001, Bush spoke to a crowd of workers through a megaphone. A person in the crowd shouted, "I can't hear you," to which Bush replied, "I can hear you. The rest of the world hears you. And the people who knocked these buildings down will hear all of us soon."

In an address to Congress, the president said, "As a symbol of America's resolve, my administration will work with Congress, and these two leaders, to show the world that we will rebuild New York City." However, 12 years after the attacks, only two buildings, 4 World Trade Center and 7 World Trade Center, have been rebuilt. One building, One World Trade Center, is currently under construction.

In November 2001, Governor Pataki started the Lower Manhattan Development Corporation (LMDC) to oversee the rebuilding of the World Trade Center. The LMDC leads federal help in the rebuilding, and works with the Port Authority of New York and New Jersey, Larry Silverstein, and Studio Daniel Libeskind. It also communicates with the local community, businesses, the city of New York, and the families of the people who were killed in the September 11 attacks.

A memorial, "Reflecting Absence", honors the people killed in the September 11 attacks and the 1993 World Trade Center bombing. It was designed by Peter Walker and Israeli-American architect Michael Arad. It has a field of trees with the footprints of the original towers. The footprints are filled with pools of water. It opened on the tenth anniversary of the attacks, on September 11, 2011.

An episode of CBS's 60 Minutes in 2010 was about the lack of work done at Ground Zero. It focused on how most of the buildings did not have a date for completion, the main building, One World Trade Center (originally called the Freedom Tower), having gone through three different designs, and the delays and high amount of money that went into the rebuilding. Larry Silverstein said that the entire site would be completed in 2037, and that billions of dollars have been spent on rebuilding the site, even though Ground Zero "is still a hole in the ground." During an interview for the episode, Silverstein said, "I am the most frustrated person in the world...I'm seventy-eight years of age; I want to see this thing done in my lifetime". However, it was said in early 2011 that a lot of work has been done on the site, with all five buildings under construction. All of the buildings will be completed between 2012 and 2016. Criticism of the work being done at Ground Zero was made in 2008 and 2009, when there was no work being done at the site.

All content from Kiddle encyclopedia articles (including the article images and facts) can be freely used under Attribution-ShareAlike license, unless stated otherwise. Cite this article:
World Trade Center site Facts for Kids. Kiddle Encyclopedia.