Five World Trade Center, also referred to as 130 Liberty Street, is a canceled building to be located in New York City. If constructed, it will follow the demolition of the Deutsche Bank Building which was destroyed on September 11. In June 2007, it was announced that financial service JPMorgan Chase planned to develop the building as a new J.P. Morgan Investment Bank world headquarters. 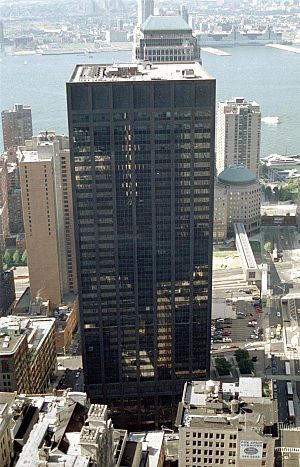 The Deutsche Bank building in 1997.

All content from Kiddle encyclopedia articles (including the article images and facts) can be freely used under Attribution-ShareAlike license, unless stated otherwise. Cite this article:
130 Liberty Street Facts for Kids. Kiddle Encyclopedia.