Mount Barker is a town in South Australia. Located approximately 33 kilometres (21 miles) from the Adelaide city centre, it is home to 14,452 residents. It is the seat of the District Council of Mount Barker, the largest town in the Adelaide Hills, and one of the fastest growing areas in the state.

Mount Barker lies at the base of a local eponymous peak called the Mount Barker summit. It is 50 kilometres from the Murray River. Mount Barker was traditionally a farming area, and many of the lots just outside the town area are farming lots, although some of them have been replaced with new subdivisions in recent times.

Mount Barker, the mountain, was first sighted by Captain Charles Sturt in 1830, although he thought he was looking at the previously discovered Mount Lofty. Captain Collet Barker corrected this error when he surveyed the area in 1831. Sturt named the mountain in honour of Captain Barker after he was killed later that year by Aborigines, at the Murray Mouth. The mountain was officially recognised by King William IV in 1834, two years before the colonisation of South Australia in 1836.

Mount Barker was originally home to the Peramangk Aboriginal people. The Ngarrindjeri people from the east also used the Summit for ceremonial and burial sites. The Mount Barker Summit is a significant Aboriginal area, and may be one of the most sacred sites near Adelaide. In 1984 the Ngarrindjeri people tried to prevent the building of a police communications tower, and in 1987 they also tried to stop the Telecom tower, although both attempts were not successful.

Mount Barker township was surveyed in 1839 by Duncan McFarlane, who was hoping the area could be used for wheat and grain farming. The land was divided into lots of 80 acres (320,000 m2), although farmers didn't settle until 1844, when John Dunn built the first steam flour mill outside of Adelaide. The flour mill ran for 50 years and is now a tourist attraction. All of the towns major buildings were built soon afterwards, with a post office (now replaced) in 1860 and a police station (also replaced) that was built in 1878. In 1883, the railway line from Adelaide to Strathalbyn was laid, but that line is now discontinued, with the line terminating short of Balhannah, and is used by the SteamRanger historic railway.

Mount Barker has since developed into a large urban centre, which is developing very rapidly. The Mount Barker district council is the area that experienced the fourth largest growth between 1996 and 2006 in South Australia, with an increase of 3,800 new residents (3% growth per year). Mount Barker is ranked fifth for fastest growth in South Australia. During the last 10 years, many new subdivisions have been developed, such as Martin-Dale and Waterford. During this period, there has also been an economic boom in Mount Barker and a number of additional malls and shopping centres, such as the Adelaide Hills Home-maker Centre, with a Radio Rentals, a Harvey Norman and the new offices for the District Council of Mount Barker. There have also recently been lodged plans for a new shopping centre, which will feature a major department store larger than 4,000 m 2.

The discovery of clover

Mount Barker is also famous as the place where the value of subterranean clover, Trifolium subterraneum as a fodder crop was discovered, proved and first promoted by A. W. Howard. His property stood at the south-east corner of Princes Highway and Bald Hills Road. Subterranean clover had been known for a very long time in Central and Southern Europe, but was looked upon as a roadside weed. Howard proved the clover to be a valuable fodder plant in some soil types in temperate climates. Subterranean clover revolutionised farming practice, converting many struggling farms into successful livestock holdings.

The discovery spread across Australia and to many other countries, due largely to Howard's generosity in publishing articles about clover, supplying seed free of charge around the world, and advising on handling. By the time of his death (2 March 1930), thousands of hectares in South Australia were carrying subterranean clover, it was growing in all Australian States, and requests for seed and information were being received in great numbers from almost all countries in the world having a temperate climate.

Howard's work is commemorated by a roadside plaque, by the incorporation of a clover leaf into the arms of the District Council of Mount Barker, and by the Howard's End vineyard and winery on the same site.

Mount Barker has a warm-summer Mediterranean climate (Köppen Csb) and is generally cooler than Adelaide (although the difference is marginal), with a mean maximum temperature of 20.0 degrees and a mean minimum temperature of 8.1 degrees. The average rainfall for the year is 765.1 mm. Mount Barker is typically the driest during February, with an average of only 25.7 mm of rain, with July usually producing the most rain, with an average rainfall of 107.5 mm.

Mount Barker is typically between 2 and 3 degrees cooler than Adelaide, which has an average temperature of 22.2 degrees, and it gets more than 200 mm more rain (on average) than Adelaide. 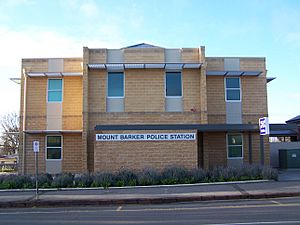 Mount Barker has a growing economy with new shopping centres and other businesses, as well as a growing population. There are plans for another shopping centre and for Mount Barker Central to be expanded. There are several new housing developments in the city that are in the planning stage at the moment. The largest plan that is still awaiting a decision from the council is a new 1000 home subdivision in the town's south.

Tasmanian fishing and aquaculture company, Huon Aquaculture, operates its fish smoking factory in Mount Barker, which provides some employment to the town.

The average income for residents of Mount Barker is $460 per week per person, $6 per week below the national average. 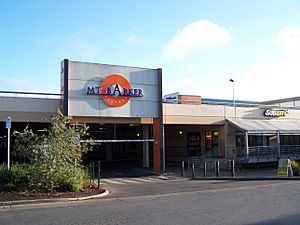 Mount Barker is the largest town in the Adelaide Hills, registering more than 10,000 people. It is the home of a number of different businesses including five shopping centres, four supermarkets and many restaurants, cafés and fast food outlets. Mount Barker also has many recreational activities available such as walking trails and a cinema. Mount Barker has five shopping centres, Mount Barker Central, also known as The Bilo Mall (The original Bilo Mall was formerly the Mount Barker Tannery which closed down in the early eighties) is the largest and oldest, containing a Coles (Previously BI-LO), a Kmart and more than 50 speciality shops. Mount Barker Village is a smaller shopping centre based around the Foodland supermarket. It has fewer speciality shops although it does have a playground. Mount Barker Plaza which used to house another Coles supermarket (that was around before the one in Mount Barker Central was converted from a BI-LO) has recently been redeveloped, adding new stores such as Dick Smith, Gloria Jeans and The Reject Shop, which is located where Coles used to be in the mall. The developers have also increased car parking on property adjacent to satisfy the requirements of the new retail additions to the site. The Woolworths Complex is not really a shopping centre as such, but is just a Woolworths and a few small shops nearby.

The most recent shopping centre is the Adelaide Hills Homemaker Centre. It replaces some old industrial buildings (which was Jacobs Smallgoods and Abattoir) near the St Francis de Sales college that were bulldozed in 2003. This industrial site also was used as the meatworks in the movie The Honorable Wally Norman. This shopping centre has a Harvey Norman, a Radio Rentals, about ten specialty shops, and a multi-storey office block housing the District Council of Mount Barker. 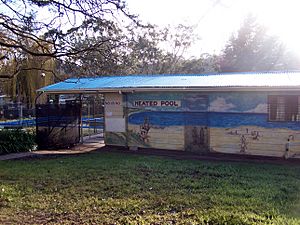 The Mount Barker Mountain Pool, next to the caravan park

Mount Barker has numerous activities that are available. The Keith Stephenson Park has the Linear Trail, a lake a playground and a skate park. The Mount Barker lawn bowls club is just across the road from Keith Stephenson Park. The linear trail goes to the Laratinga Wetlands, and is a total length of about 3 km. There are also many walking trails and a few barbecues at the Laratinga Wetlands.

Just up the hill from Keith Stephenson Park is the Mount Barker Wallis Cinema. The cinema has seven screens, all with full Dolby Digital surround. The cinema is partially underground, with only about three rows of seats raised above ground level, and the rest is below. The cinema is right next to the Auchendarroch House restaurant.

Mount Barker has a single 18-hole, 5,614m golf course that is near the residential area on Bald Hills Road. The golf course is a par 70. Mount Barker is also home to the SteamRanger historic railway which operates The Southern Encounter steam trains through Strathalbyn and Goolwa to Victor Harbor.

Mount Barker has a single local newspaper, The Courier that is published weekly on Wednesdays. It won SA's Best Regional Newspaper in 2006, and is "The newspaper of the Adelaide Hills since 1880". There is also the Adelaide Hills transmission of the local radio station, Power FM, which transmits on 100.3 FM. A community radio station, Hills Radio 88.9 FM commenced broadcasting on 22 August 2014, and has a broadcast radius of approximately 20 km from Mount Barker. 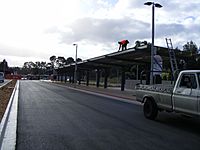 The Park 'n' Ride Facility in Mount Barker being completed

Mount Barker has an Ambulance Station and a hospital on Wellington Road, as well as the Mount Barker State Emergency Service unit which is one of the busiest in the state.

All content from Kiddle encyclopedia articles (including the article images and facts) can be freely used under Attribution-ShareAlike license, unless stated otherwise. Cite this article:
Mount Barker, South Australia Facts for Kids. Kiddle Encyclopedia.