Prior to 1995 when the Adelaide to Melbourne line was converted to standard gauge, SteamRanger was based at Dry Creek, an industrial suburb in the northern suburbs of Adelaide, and home to the main road-rail freight depots in Adelaide. The Southern Encounter operated from Adelaide instead of Mount Barker, including six tunnels through the Mount Lofty Ranges. Special services were also operated to other places on the South Australian broad gauge network including Burra (near the Clare Valley), Nuriootpa in the Barossa Valley and shorter services on the metropolitan network.

The Cockle Train operates year-round between Goolwa and Victor Harbor. It operates with a steam locomotive in school holidays, and historic diesel locomotives or railcars other weekends.

The Southern Encounter runs from Mount Barker to Victor Harbor during winter, utilising most of the remaining broad gauge branch from the main Adelaide to Melbourne line.

Some shorter services along the line are: 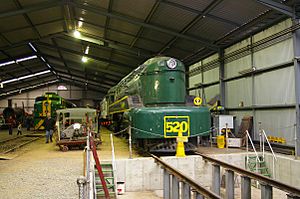 Owned by SteamRanger but not on premises:

All content from Kiddle encyclopedia articles (including the article images and facts) can be freely used under Attribution-ShareAlike license, unless stated otherwise. Cite this article:
SteamRanger Heritage Railway Facts for Kids. Kiddle Encyclopedia.