Strathalbyn is a town in South Australia, in the Alexandrina Council. As of 2011, the town had a population of 5654 people. 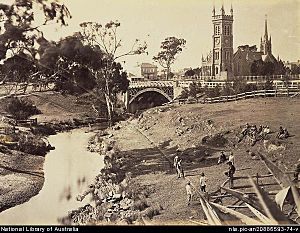 The town was founded in 1839, the first landholders being Dr. Rankine, followed by Donald McLean. Strathalbyn was connected by broad gauge horse tram to Goolwa and Victor Harbor from 1869 The Victor Harbor railway line was extended to Mount Barker and Adelaide and upgraded for steam engines from 1884. It was isolated again in 1995 when the Adelaide-Melbourne railway line was converted to standard gauge. SteamRanger still run historic tourist trains on the isolated broad gauge line, including stops at Strathalbyn.

Strathalbyn has 4 pubs on the centre of town, The Victoria, The Robin Hood, The Terminus, and the Commercial. It is also host to an annual collectors, hobbies and antique fair, held the third weekend of August every year. Other popular events are the Strathalbyn Rotary Club's renowned Duck Race, the Strathalbyn Show, and the collaborative Street Parade and Carols by Candlelight. There is also a Sunday market, once per month, at the railway station.

In 1975, street scenes from the film Picnic at Hanging Rock were filmed in the town.

Strathalbyn is 60 km southeast of Adelaide on the banks of the River Angas. The Children's Bridge is a pedestrian bridge over the river in the park.

Small lead, zinc, gold and copper mines operated in the area in the later part of the 19th century, but these have all been long closed, and did not have a significant effect on the development of the town. In 2008, mining company Terramin Australia Ltd established an underground zinc mine with the decline portal and much of the above-ground operation situated in a quarry east of the town, injecting an estimated $29 million into the local economy and creating around 100 jobs. The mine will yield zinc and lead, with small quantities of silver, gold and copper and was expected to operate for seven years. This proposal was opposed by "The Residents For A Future Strathalbyn Inc." who were concerned about ecologically unsustainable development within their district. 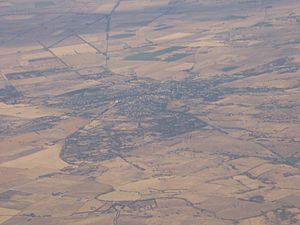 The mine stopped operating in October 2013 due to low metal prices and the economic ore reserve running out. It is possible that it will reopen to extract more ore if the sale price increases. The mine closure resulted in over 100 jobs being lost to the town.

All content from Kiddle encyclopedia articles (including the article images and facts) can be freely used under Attribution-ShareAlike license, unless stated otherwise. Cite this article:
Strathalbyn, South Australia Facts for Kids. Kiddle Encyclopedia.