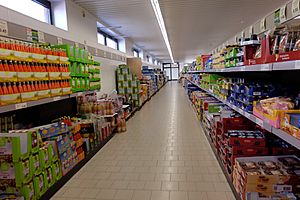 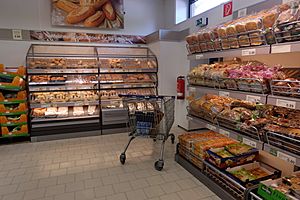 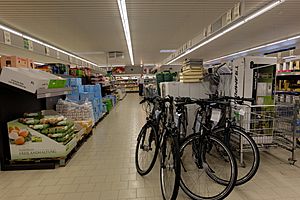 Aldi is a supermarket in Germany and in most parts of the European Union. Aldi shops are also in Australia and the United States. Most German towns and villages have at least one Aldi shop. There are about 4,100 stores in Germany, and 7,600 worldwide. The name of the shop stands for ALbrecht-DIscount.

The company is a food retailer, but it also sells non-food at times. In the 1990s, Aldi often sold computers that were sought after. Aldi has a reputation for being cheap. It forces its suppliers to sell to them at low prices.

The company was started in 1913 as a family grocery business in Essen. In 1946, brothers Karl Albrecht (1920-2014) and Theo Albrecht (1922-2010) took over the business from their mother. Theo had been held by the US in a prisoner of war camp. They started the idea of discount shops in Germany. They decided to have a limited range of goods and sell them at a discount price. In 1960, the company was split into Aldi Nord (Aldi North) under the control of Theo, and Aldi Süd (Aldi South) under the control of Karl. The brothers became billionaires. In 2009 Karl's wealth was estimated to be €25 billion. Theo was kidnapped in 1971 and held prisoner for 17 days until a seven million mark ransom was paid. The family have avoided publicity and there are few known photographs of them.

All content from Kiddle encyclopedia articles (including the article images and facts) can be freely used under Attribution-ShareAlike license, unless stated otherwise. Cite this article:
Aldi Facts for Kids. Kiddle Encyclopedia.