Kids Encyclopedia Facts
For the 1985 British drama film, see Wetherby (film).
Not to be confused with Weatherby.

Wetherby is a market town and civil parish within the City of Leeds metropolitan borough, in West Yorkshire, England. It stands on the River Wharfe, and has been for centuries a crossing place and staging post on the A1 Great North Road, being midway between London and Edinburgh. It has a population of 11,155. The population of the Wetherby Civil Parish in 2011 was 10,772.

Historically a part of the Wapentake of Skyrack within the West Riding of Yorkshire, Wetherby is mentioned in the Domesday Book of 1086 as Wedrebi, thought to derive from wether- or ram-farm or else meaning "settlement on the bend of a river".

Wetherby Bridge, which spans the River Wharfe, is a Scheduled Ancient Monument and a Grade II listed structure. The course of the Old Great North Road passes through the town and, as result of its situation on the road, a large number of coaching inns were established in Wetherby which are still used by travellers today. 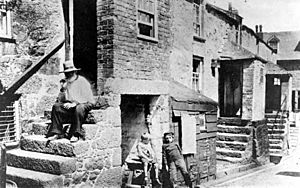 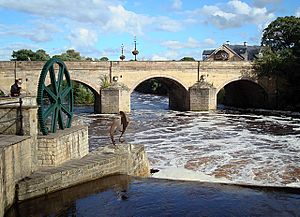 In the 12th and 13th centuries the Knights Templar and later the Knights Hospitallers were granted land and properties in Yorkshire. The local preceptory founded in 1217 was at Ribston Park. In 1240 the Knights Templar were granted by Royal Charter of Henry III the right to hold a market in Wetherby (known then as Werreby). on Thursdays and a yearly fair was permitted lasting three days over the day of St James the Apostle.

From 1318 to 1319 the North of England suffered many raids from the Scots. After the Battle of Bannockburn Wetherby was burned and many people taken and killed. According to the blue plaque at the entrance to the lane, Scott Lane could be named after the Scottish raiders in 1318 or the 18th-century drovers who used Wetherby as a watering place.

In the English Civil War in 1644, before marching to Tadcaster and on to Marston Moor, the Parliamentarians spent two days in Wetherby joining forces with the Scots.

In the heyday of the coaching era, Wetherby had up to forty inns and alehouses. The first recorded mail coach arrived in Wetherby in 1786.

In 1824, William Cavendish, 6th Duke of Devonshire sold the town of Wetherby (except one house) to finance work at Chatsworth. Wetherby provides the setting for the novel Oldbury (1869) by Annie Keary.

During the First World War, many Wetherby men served with either the 5th or 9th Battalion, West Yorkshire Regiment, which had great losses in Flanders. A war memorial designed by E. F. Roslyn was dedicated on 22 April 1922.

In 1918, residents contributed to support the crew of the Racecourse class minesweeper HMS Wetherby despite hardship and shortages caused by the war.

During the Second World War, nearby RAF Tockwith was renamed RAF Marston Moor to avoid confusion with RAF Topcliffe. Part of the airfield is now a driver training centre and the old control tower is used as the offices. Parts of the runways can still be seen. Clark Gable was stationed at Marston Moor, during the Second World War, as a member of the USAAF ground staff, with the rank of captain. He was transferred to RAF Polebrook in Northamptonshire. Adolf Hitler offered a reward to anyone who was able to catch the airman. Group Captain Leonard Cheshire was stationed at Marston Moor for a short while before leaving to become commander of the 617 Dam Buster squadron.

Wetherby had the only stone frigate north of London, built on Hallfield Lane in 1942 (it later become the local secondary school), named in turn; HMS Cabot, Demetrius, Rodney and Ceres. The base was closed in 1958 and transferred to Chatham.

Throughout the 1960s the town council deliberated over how best to enlarge the town centre to cope with the needs of a growing population and to provide the town with a purpose built supermarket. Plans were put forward to enlarge the town over the ings, or to develop the town centre into a pedestrian precinct. In the end it was decided to build a purpose built shopping precinct, which was built in the 1970s and underwent a significant redevelopment throughout 2003. By 2006 the remaining open parts of the Horsefair Centre were enclosed under a glass canopy roof.

Wetherby has a cool, fairly moist climate with changeable weather year-round. Liquid equivalent precipitation totals about 630mm per year and is fairly well distributed through the seasons.

Winter temperatures average just above freezing for lows, with highs about 5-9 C.

Frost and snow are not uncommon, but are rarely severe or prolonged. Temperatures very rarely drop as low as -10 C.

According to the 2001 UK Census, the Wetherby ward has a population of 26,473 and the immediate town has a population of 11,155. However, since this was taken, the immediate town area has grown considerably. 150 new dwellings were built in one development in Micklethwaite, then a further 20 were added, flats have also appeared at the former Motorworld, La Locanda Restaurant, Deighton Road car garage, Fields Works and the cattle market.

For many years from 1959, the town's bypass started at a roundabout near a Forte Group Posthouse hotel until July 1988 when the A1 was diverted at a cost of £11.5 million. On 18 December 2004, the northern section of the bypass was diverted to a new section of the A1(M), bypassing Kirk Deighton, after construction work had begun in August 2003. The upgrade of the section between Bramham and Wetherby started in July 2007 and was scheduled to be completed in 2009. The upgrading of the A1 included the construction of Wetherby Services at the Wetherby North Junction. The upgrading of the A1(M) in Wetherby was the final development after 50 years of gradual improvement to motorway standard. A new road links all routes in and out of the town with the A1(M).

Wetherby bus station in the Market Place was redeveloped in 1995. Since the partial pedestrianisation of the Market Place in 2007 capacity at the bus station has been reduced. Services are operated by National Express coach services, First West Yorkshire run buses to Leeds via Roundhay, Transdev Harrogate, runs to Leeds via Boston Spa and Seacroft and to Harrogate via Spofforth, Connexionsbuses run to Harrogate and York via Tockwith, Eddie Brown run to Bickerton, Arriva buses run to Wakefield via Garforth and Sandla Transport run to Knaresborough, Tadcaster and Otley. The daily footfall is estimated at 1634.

Local passenger services between Leeds, Wetherby, and Harrogate, and between Wetherby and Church Fenton on the Cross Gates–Wetherby line and the Harrogate–Church Fenton line were withdrawn on 6 January 1964, involving closure of Wetherby railway station, one of the very first stations to be closed as part of the Beeching Axe. The closest mainline station is Leeds railway station.

The closest airport is Leeds Bradford International Airport in Yeadon. 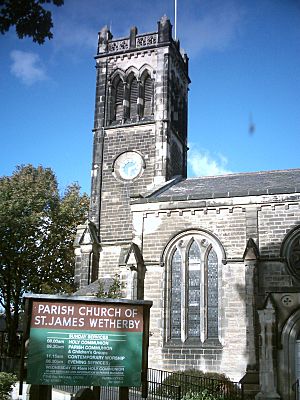 There are five churches in Wetherby. The parish church is dedicated to St James[1] and its daughter church, The Church on the Corner meets in the old Cemetery Chapel on Hallfield Lane. There is a Methodist church on Bank Street [2], a Baptist church {http://www.wetherbybaptist.org.uk/] and the Community Church of the Salvation Army.[3] St Joseph's Roman Catholic Church's building was opened in 1986 and won the Leeds award for Architecture in 1987. Two smaller Catholic churches in Bardsey and Sicklinghall operate as satellite churches to the Wetherby one and do not have their own ministers.

The Baptist Church was originally Anglican and was known as Barleyfields Church. Early in 2009 it became part of the Baptist Union of Great Britain. It originally met in the Barleyfields Centre, but moved to Deighton Gates School in September 2009.

In 1989 the 'Wetherby in Bloom' committee was set up and has charitable status. The town won the Entente Florale gold award in 1999 and an International Communities in Bloom award in 2005. It achieved success in the RHS Britain in Bloom competition in 1998, 2002 and 2010, along with numerous regional gold awards over the last 15 years. 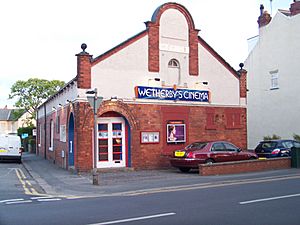 The annual Wetherby Arts Festival is sponsored by Leeds City Council and Wetherby Town Council. It promotes the arts by providing a platform for local groups to perform and to bring in other performers and art forms.

The local newspaper is the Wetherby News and the Lifestyle magazine is the Excelle magazine. The regional radio station is BBC Radio Leeds. Tempo FM is Wetherby's very own 100% volunteer run community radio station, with studios located in the old council offices in Westgate. Wetherby Film Theatre is an independently owned, traditional single screen cinema on Caxton Street, which, although opened in 1915 as a cinema, had been used for some time as a bingo and social club, before being re-opened as a cinema in 1994. 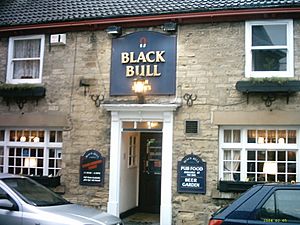 Black Bull in 2003, before refurbishment

In its hey-day Wetherby had seventeen pubs in its town centre. Only eleven now remain, of which ten are still open. The town's oldest surviving pub the 'Brunswick Hotel' closed in 2003 and reopened as Harris' Bar, and in 2012 reopened again as The Brunswick after refurbishment by Enterprise Inns. The Three Legs public house closed in 2007 and became "bar Thr3" (Wetherby's first non smoking pub).

During the Second World War, The Angel public house served German and Italian prisoners of war from the nearby camps and, being the only pub in the town to do so, attracted some controversy as a result.

The Angel was sold in 2010 and re-opened as Sant Angelo Italian Restaurant and Ice Cream Parlour. The pub was recreated on the first floor and has become one of the town's busiest weekend drinking venues.

A mock news report, filmed in Wetherby about fictional pub 'The Kings Head', was broadcast by Soccer AM and claimed that the pub was being converted into a new 'American style sports bar'. Wetherby residents, all portrayed as working-class Northern stereotypes, were interviewed and were all dismayed, agreeing that "change was bad".

Wetherby Sports Association (WSA) came about in 1999 as the brain child of Wetherby Bulldogs and Wetherby Athletic who identified a need for a “home” they could call their own after years of playing out of concrete bunkers by the river and holding meetings in local pubs – the outcome of which was the Lottery/FA funded building on Lodge Lane which is used extensively by the local community today.

WSA is a registered charity which provides a community hub for sports clubs and societies in Wetherby that would otherwise struggle to fund a place of their own. WSA has seen its ranks grow over the years and in addition to Wetherby Bulldogs and Wetherby Athletic is now home to Wetherby Runners, Wetherby Wheelers, Wetherby Petanque, the local branch of the Military Vehicles society, Wetherby & District Angling Club, Pilates, Zumba, Wetherby Park Run, Gym Gems and many more.

There is also a similar club at Grange Park, serving members of the town's rugby union, cricket and bowls clubs as well as members of its committee and association.

The town's main Working Men's Club, Wetherby and District Social Club is based on the Sandbeck Industrial Estate. This burnt down in a fire in 2002. The fire was initially treated as suspicious by West Yorkshire Police, however investigations were taken no further. The club was rebuilt in its original location. As was the case in Belle Isle the rebuilt club was significantly larger than its predecessor and offered its members far superior facilities.

All content from Kiddle encyclopedia articles (including the article images and facts) can be freely used under Attribution-ShareAlike license, unless stated otherwise. Cite this article:
Wetherby Facts for Kids. Kiddle Encyclopedia.