Knaresborough is an historic market town, spa town and civil parish in the Borough of Harrogate, North Yorkshire, England. Historically part of the West Riding of Yorkshire, it is located on the River Nidd, 4 miles (6.4 km) east from the centre of Harrogate. 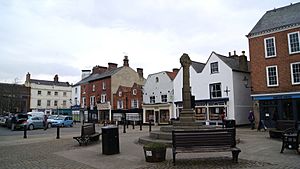 Knaresborough is mentioned in the Domesday Book as Chenaresburg, meaning 'Cenheard's fortress' in the wapentake of Burghshire, renamed Claro Wapentake in the 12th century. Knaresborough Castle dates from Norman times; around 1100, the town began to grow and provide a market and attract traders to service the castle. The present parish church, St John's, was established around this time. The earliest identified Lord of Knaresborough is around 1115 when Serlo de Burgh held the 'Honour of Knaresborough' from the King.

Hugh de Morville was granted the Honour of Knaresborough in 1158. He was constable of Knaresborough and leader of the group of four knights who murdered Archbishop Thomas Becket at Canterbury Cathedral on 29 December 1170. The four knights fled to Knaresborough and hid at the castle. Hugh de Morville forfeited the lands in 1173, not for his implication in the murder of Thomas Becket, but for "complicity in the rebellion of young Henry", according to the Early Yorkshire Charters.

Although a market was first mentioned in 1206, the town was not granted a Royal Charter to hold a market until 1310, by Edward II. A market is still held every Wednesday in the market square. During Edward II's reign, the castle was occupied by rebels and the curtain walls were breached by a siege engine. Later, Scots invaders burned much of the town and the parish church. In 1328, as part of the marriage settlement, Queen Philippa was granted "the Castle, Town, Forest and Honour of Knaresborough" by Edward III and the parish church was restored. After her death in 1369, the Honour was granted by Edward to their younger son, John of Gaunt, the Duke of Lancaster and since then the castle has belonged to the Duchy of Lancaster. After the accession of Henry IV the castle lost much of its importance in national affairs, but remained a key site in regional administration for another century.

During the Civil War, following the Battle of Marston Moor in 1644, the castle was besieged by Parliamentary forces. The castle eventually fell and in 1646 an order was made by Parliament for its destruction (but not carried out till 1648). The destruction was mainly done by citizens looting the stone. Many town centre buildings are built of 'castle stone'.

The railway age began in Knaresborough in 1848 with the opening of a railway station on Hay Park Lane; this was replaced with the current one three years later in 1851. The town had a railway line to Boroughbridge until it closed to passengers in 1950; it was dismantled in 1964.

Historically in the West Riding of Yorkshire, Knaresborough became part of North Yorkshire in 1974. 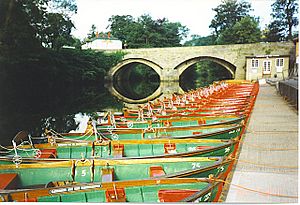 The rowing boats on the River Nidd are a popular tourist attraction in the town.

Knaresborough hosts the annual Bed Race, organized by the Knaresborough Lions Club. It is held on the second Saturday of June. The event was first staged in 1966.

The town was used in the opening election sequence in the first episode of the ITV comedy series The New Statesman and some exterior shots for the series were filmed around Knaresborough.

Knaresborough has one theatre; the Frazer Theatre, situated just off High Street. 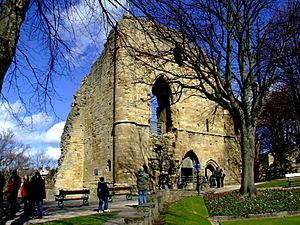 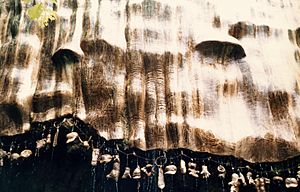 The Dropping Well in 1985, showing a selection of petrified toys

Sights in the town include the remains of Knaresborough Castle, Mother Shipton's Cave, the House in the Rock, the railway viaduct over the river Nidd, and St Robert's Cave (dating from the Middle Ages). Knaresborough is the site of Ye Oldest Chymist Shoppe in England, opened in 1720, and the Courthouse Museum in the castle grounds.

The principal areas of public open space are the Knaresborough Castle grounds, Horseshoe Field, the King George V Playing Field and Jacob Smith Park, a 30 acres (12 ha) parkland on the edge of the town, bequeathed to Knaresborough by Miss Winifred Jacob Smith in 2003.

Conyngham Hall is situated close to the town centre. It is currently used to accommodate businesses and as parkland. Until the 1980s there was a small zoo in the grounds.

Near to the castle are Bebra Gardens, formerly the Moat Gardens, renamed after Knaresborough's twin town in Germany. The Commercial (formerly Borough Bailiff) public house, owned by the Samuel Smith Brewery, is the oldest pub in Knaresborough.

Knaresborough is unusual in that, since the closure of the Co-operative supermarket on Chain Lane in 2015, there is no mainstream supermarket. There is however a small Lidl. The St. James retail park is situated on the outskirts of the town off Wetherby Road and has a number of retail chains based there. The town has 15 operating pubs, a wine bar, two working men's clubs and several restaurants. There are a number of high street retailers with branches in the town centre, mostly situated around the High Street, Market Place and Castle Courtyard (a shopping arcade in the former town hall). The town also has a small municipal swimming pool. 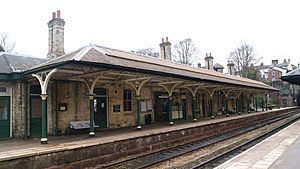 Knaresborough is served by Knaresborough railway station, on the Harrogate Line between Leeds and York. The town is four miles from junction 47 of the A1 (M) Motorway (Great North Road), and on the A59 which links York and Wallasey. It is further served by Transdev and Connexions who both run buses in the area that centre around Knaresborough bus station on the High Street. The closest airport is Leeds Bradford Airport with bus links from neighbouring Harrogate. 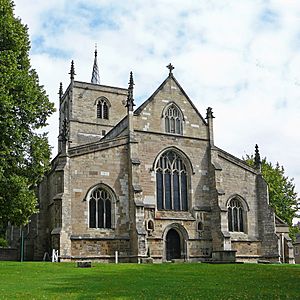 St. John the Baptist Church is the largest church in Knaresborough.

The town has two Church of England churches, one Roman Catholic, one Methodist and one United Reformed and one Mormon.

All content from Kiddle encyclopedia articles (including the article images and facts) can be freely used under Attribution-ShareAlike license, unless stated otherwise. Cite this article:
Knaresborough Facts for Kids. Kiddle Encyclopedia.