The Poor Fellow-Soldiers of Christ and of the Temple of Solomon, commonly known as the Knights Templar or the Order of the Temple, were among the most famous of the Western Christian military orders. The organization lasted for two centuries in the Middle Ages. It was founded after the First Crusade of 1096, with its original purpose to ensure the safety of the many Christians who made the pilgrimage to Jerusalem after it was taken over.

It was officially endorsed by the Roman Catholic Church around 1129, and became a favored charity by many Christians and grew fast in membership and power. Templar knights wore white mantles quartered by a red cross and were among the most skilled fighting units of the Crusades.

Those members of the Order that did not fight managed a large economic infrastructure throughout Christendom, innovating financial techniques that were an early form of banking, and building many fortifications throughout the Mediterranean and the Holy Land.

The Templars' success was tied closely to the Crusades; when the Holy Land was lost, support for the Order faded.

Rumors about the Templars' secret initiation ceremony created mistrust, and King Philip IV of France, deeply in debt to the Order, began pressuring Pope Clement V to take action against the Order.

In 1307, many of the Order's members in France were arrested, tortured into giving false confessions, and then burned at the stake.

In 1312, Pope Clement, under continuing pressure from King Philip, disbanded the Order.

No precise numbers exist, but it is estimated that at the order's peak there were between 15,000 and 20,000 Templars, of whom about a tenth were actual knights. 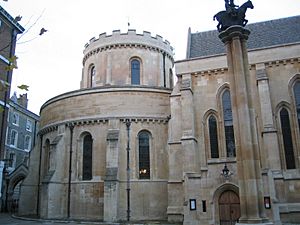 Temple Church, London - it was the location for Templar initiation ceremonies. In modern times it is a popular tourist attraction

All content from Kiddle encyclopedia articles (including the article images and facts) can be freely used under Attribution-ShareAlike license, unless stated otherwise. Cite this article:
Knights Templar Facts for Kids. Kiddle Encyclopedia.