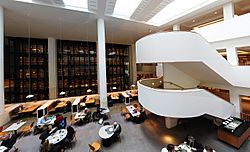 Interior of the British Library.

The British Library contains over 170 million items in every language that is known. It has around 25 million books, more than any other library. It has manuscripts and historical items dating back as far as 300 BC. There are books, journals, newspapers, magazines, sound and music recordings, patents, databases, maps, stamps, prints, drawings and much more.

The British Library, before it got its present name, started out as a group of collections made by several people in the 18th century and then given as part of a national library. The collectors were King George III, Sir Robert Cotton, Sir Hans Sloane, and Robert Harley. The national library was part of the British Museum and was kept at various places, with some of the most important items always being on public display in the museum.

The British Library was created in 1973 by the British Library Act 1972. Since 1997 the main collection has been housed in a single new building on Euston Road next to St. Pancras railway station. In the middle of the building is a four-storey glass tower containing the ‘’King's Library’’, with 65,000 printed volumes along with other pamphlets, manuscripts and maps collected by King George III between 1763 and 1820.

In December 2009 a new storage building at Boston Spa was opened. It cost £26million and will house seven million items, stored in more than 140,000 bar-coded containers, which are retrieved by robots, from the 262 kilometres of temperature- and humidity-controlled storage space.

Highlights of the collections 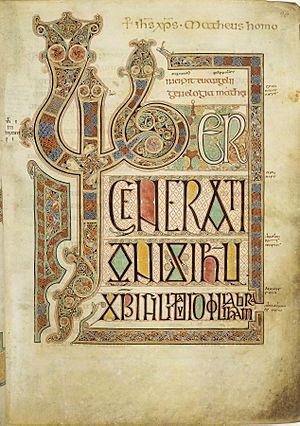 The beginning of the Gospel of Matthew from the Lindisfarne Gospels

All content from Kiddle encyclopedia articles (including the article images and facts) can be freely used under Attribution-ShareAlike license, unless stated otherwise. Cite this article:
British Library Facts for Kids. Kiddle Encyclopedia.