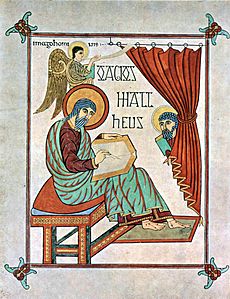 From the Gospel of St Matthew, by the 'Master of Lindisfarne' 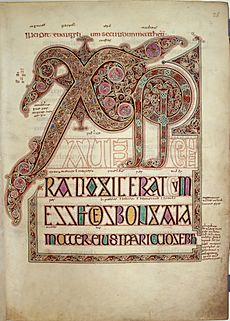 The 'Chi Rho' monogram from the Lindisfarn Gospels 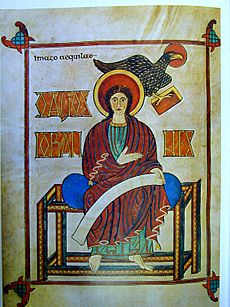 John the Evangelist from the Lindisfarne Gospels

The Lindisfarne Gospels is an Illuminated manuscript book of the gospels. It was made at a monastery off the coast of Northumberland at Lindisfarne, about 700 AD.

The manuscript is now on display in the British Library. It is one of the finest works in the style which is called insular art. This combines Mediterranean, Anglo-Saxon and Celtic elements. At this time, Britain and Ireland shared a style which was different from that of the rest of Europe.

The Lindisfarne Gospels are thought to be by Eadfrith, a monk who became Bishop of Lindisfarne in 698 and died in 721. The Gospels are richly illustrated, and were originally in a fine leather binding covered with jewels and metals. During the Viking raids on Lindisfarne, this cover was lost, and a replacement was made in 1852. The text is written in a hand known as 'insular script'.

In the 10th century an Old English translation of the Gospels was written word-for-word between the lines of the Latin text. It was done by Aldred, Provost of Chester-le-Street. This is the oldest translation of the Gospels into English that we have. The Gospels may have been taken from Durham Cathedral during the Dissolution of the Monasteries, ordered by Henry VIII. In the 18th century the book was given to the British Museum. From there it went to the British Library when this was split off from the British Museum.

All content from Kiddle encyclopedia articles (including the article images and facts) can be freely used under Attribution-ShareAlike license, unless stated otherwise. Cite this article:
Lindisfarne Gospels Facts for Kids. Kiddle Encyclopedia.