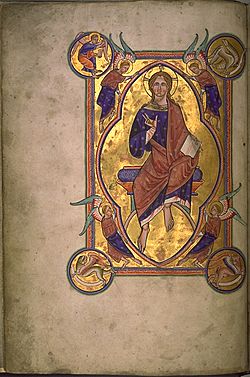 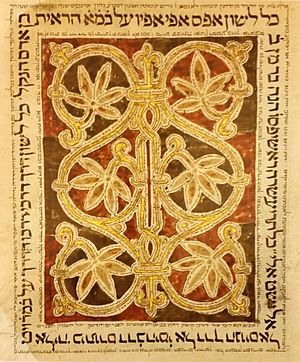 Illuminated manuscript on parchment of the Pentateuch, in Hebrew. National Library of Israel, Jerusalem

An illuminmanuscript is a manuscript in which the text is supplemented by the addition of decoration or illustration, such as decorated initials, borders and miniatures. In the strictest definition of the term, an illuminated manuscript only refers to manuscripts decorated with gold or silver. However, in both common usage and modern scholarship, the term is now used to refer to any decorated manuscript.

Beginning in the late middle ages manuscripts began to be produced on paper. Illuminated manuscripts are the most common type of artifact to survive from the middle ages. They are also the best surviving specimens of medieval painting. Indeed, for many areas and time periods, they are the only surviving examples of painting. 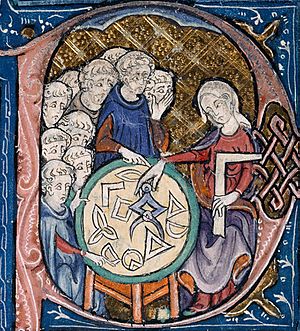 Illumination was a complex and frequently costly process. As such, it was usually reserved for special books: an altar Bible, for example. Wealthy people often had richly illuminated "books of hours" made, which set down prayers appropriate for various times in the liturgical day.

In the making of an illuminated manuscript, the text was usually written first. Sheets of parchment or vellum, animal hides specially prepared for writing, were cut down to the appropriate size. After the general layout of the page was planned (eg initial capital, borders), the page was lightly ruled with a pointed stick, and the scribe went to work with ink-pot and either sharpened quill feather or reed pen.

The script depended on local customs and tastes. The sturdy Roman letters of the early Middle Ages gradually gave way to cursive scripts such as Uncial and half-Uncial, especially in the British Isles, where distinctive scripts such as insular majuscule and insular minuscule developed. Stocky, richly textured blackletter was first seen around the 13th century and was particularly popular in the later Middle Ages.

All content from Kiddle encyclopedia articles (including the article images and facts) can be freely used under Attribution-ShareAlike license, unless stated otherwise. Cite this article:
Illuminated manuscript Facts for Kids. Kiddle Encyclopedia.