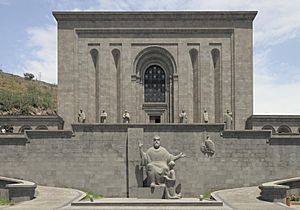 Mesrop Mashtots' Matenadaran Institute of Ancient Manuscripts in Yerevan, Armenia, is one of the richest depositories of manuscripts and books in the world. 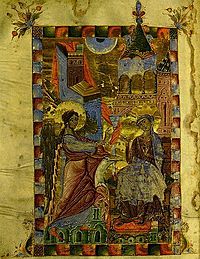 The Matenadaran is in possession of a collection of nearly 17,000 manuscripts and 30,000 other documents which cover a wide array of subjects such as theology, philosophy, historiography and history, geography, grammar, art and art history, medicine and science. In the first decades of Soviet rule, its collection was largely drawn from manuscripts stored in ecclesiastical structures in the historic regions of Vaspurakan (eastern Turkey, Van region) and Taron (Northeastern Turkey), in schools, monasteries and churches in Armenia and the rest of the Soviet Union (such as those located in New Nakhichevan and the Nersisyan Seminary in Tbilisi), the Lazarev Institute of Oriental Languages in Moscow, from the Armenian Apostolic Church's Primacy in Tabriz, the village of Darashamb in Iran, as well as the personal collections given by private donors. In addition to the Matenadaran's Armenian manuscripts, there is a vast collection of historical documents numbering over 2,000 in languages such as Arabic, Persian, Hebrew, Japanese and Russian. The Mashtots Matenadaran Ancient Manuscripts Collection was inscribed on UNESCO's Memory of the World Programme Register in 1997 in recognition of its world significance.

The Armenian collection at the Matenadaran is abundantly rich in manuscripts dealing in all fields of the humanities, but particularly historiography and theology/philosophy. The writings of classical and medieval historians Movses Khorenatsi, Yeghishe and Aristakes Lastivertsi are preserved here, as are the legal, philosophical and theological writings of other notable Armenian figures. The preserved writings of Grigor Narekatsi and Nerses Shnorhali at the Matenadaran form the cornerstone of medieval Armenian literature.

The Armenian collection is also composed of 2,500 Armenian illuminated manuscripts, which include such prominent examples as the Echmiadzin Gospel (989) and the Mugni Gospels (1060). Another prominent manuscript in the collection is the Homilies of Mush, written in the years 1200-1202 A.D. in the Avak Monastery in Yerzenka (modern-day Erzincan, Turkey), which measures 55.3 cm by 70.5 cm (21.8 inches by 27.8 inches), weighs 27.5 kg (60.6 lbs.), and contains 603 calf skin parchment pages. The book was found by two Armenian women in a deserted Armenian monastery in the Ottoman Empire during World War I and the Armenian Genocide period. Since it was found to be too heavy to be carried, it was split into two: one half was wrapped in a cloth and buried, while the second half was taken to Georgia. A couple of years later, a Polish officer found the first half and sold it to an officer in Baku. It was eventually brought to Armenia and the two halves were finally reunited.

All content from Kiddle encyclopedia articles (including the article images and facts) can be freely used under Attribution-ShareAlike license, unless stated otherwise. Cite this article:
Matenadaran Facts for Kids. Kiddle Encyclopedia.