This article is about the city in Turkey. For the Etruscan god, see Ani 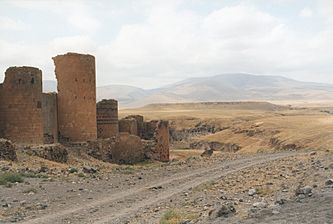 The walls of Ani showing a defensive tower

Ani (Armenian: Անի, Latin: Abnicum) is a ruined and uninhabited medieval city-site in Turkey. It is in the province of Kars, beside the border with Armenia. It was once the capital of a medieval Armenian kingdom that covered much of present-day Armenia and eastern Turkey.

At the height of its great times, Ani had a population of 100,000 - 200,000 people and was the rival of Constantinople, Baghdad and Cairo. Long ago renowned for its splendor and magnificence, Ani has been abandoned and largely forgotten for centuries.

Armenian chroniclers first mention Ani in the 5th century AD. They describe it as a strong fortress built on a hilltop and a possession of the Armenian Kamsarakan dynasty.

By the early 9th century the former territories of the Kamsarakans in Arsharunik and Shirak (including Ani) had been incorporated into the territories of the Armenian Bagratuni dynasty. Their leader, Ashot Msaker (Ashot the Meateater) (806-827) was given the title of ishkhan (prince) of Armenia by the Caliphate in 804.

There are many other minor monuments at Ani. These include a convent known as the Virgins' chapel; a church used by Chalcedonian Armenians; the remains of a single-arched bridge over the Arpa river; the ruins of numerous oil-presses and several bath houses; the remains of a second mosque with a collapsed minaret; a palace that probably dates from the 13th century; the foundations of several other palaces and smaller residences; the recently excavated remains of several streets lined with shops; etc.

All content from Kiddle encyclopedia articles (including the article images and facts) can be freely used under Attribution-ShareAlike license, unless stated otherwise. Cite this article:
Ani Facts for Kids. Kiddle Encyclopedia.