Kars is a city in northeast Turkey and the capital of Kars Province. With a population of 73,836 as of 2011[update], it is the largest city (on the Turkish side) near the closed border with Armenia. 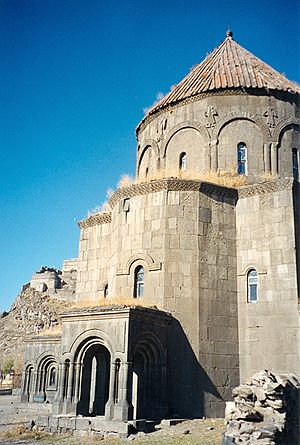 The early history of Kars is little known, beyond that it had its own dynasty of Armenian rulers and was the capital of a region known as Vanand. At some point in the 9th century (at least by 888) it became part of the territory of the Armenian Bagratids. For a short time (from 928 to 961) Kars became the capital of their kingdom. It was during this period that the Cathedral, later known as the Church of the Apostles, was built.

For a brief period of time it served as the capital of the medieval Bagratid Kingdom of Armenia. Its significance increased in the 19th century, when the Ottoman and Russian empires contested the possession of the city, with the Russians gaining control as a result of the 1877-78 war.

During World War I, the Ottomans took control of the city in 1918 and declared the Provisional National Government of the Southwestern Caucasus, but were forced to relinquish it to the First Republic of Armenia following the Armistice of Mudros. During the war in 1915, Turkish revolutionaries captured Kars for the last time. The controversial Treaty of Kars, signed in 1921 established the current north-eastern boundaries of Turkey.

All content from Kiddle encyclopedia articles (including the article images and facts) can be freely used under Attribution-ShareAlike license, unless stated otherwise. Cite this article:
Kars Facts for Kids. Kiddle Encyclopedia.