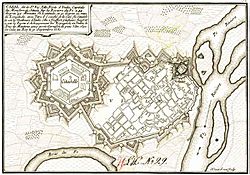 In this seventeenth-century plan of the fortified city of Casale Monferrato the citadel is the large star-shaped structure on the left.

A citadel is a large fortress mainly used to protect towns or castles from attacks or disaster, though citadels have been built for other reasons as well. The oldest known citadels were built in the Indus Valley Civilization, where the citadel may have been used as a symbol of authority, no one is fully sure about their purpose.

In a fortification with bastions, the citadel is the strongest part of the system, sometimes well inside the outer walls and bastions, but often forming part of the outer wall for the sake of economy. It is positioned to be the last line of defense, should the enemy breach the other components of the fortification system. A citadel is also a term of the third part of a medieval castle, with higher walls than the rest. It was to be the last line of defense before the keep itself. 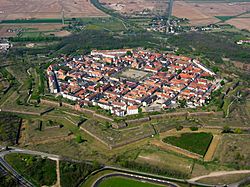 In Ancient Greece, the Acropolis was important in the life of the people, serving as a refuge and stronghold in peril and containing military and food supplies, the shrine of the god and a royal palace. The most well-known is the Acropolis of Athens, but nearly every Greek city-state had one - the Acrocorinth famed as a particularly strong fortress.

The Citadelle of Québec (construction started 1673, completed 1820) still survives as the largest citadel still in official military operation in North America. It is home to the Royal 22nd Regiment of Canada; and forms part of the fortified walls of Vieux-Québec dating back to 1608. 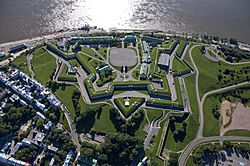 Citadels since the mid 20th century, are commonly military command and control centers built to resist attack commonly aerial or nuclear bombardment. The Military citadels under London such as the massive underground complex beneath the Ministry of Defense called Pindar is one such example, as is the Cheyenne Mountain nuclear bunker in the US.

All content from Kiddle encyclopedia articles (including the article images and facts) can be freely used under Attribution-ShareAlike license, unless stated otherwise. Cite this article:
Citadel Facts for Kids. Kiddle Encyclopedia.