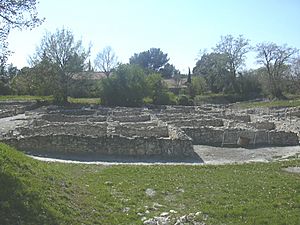 Remains of the Oppidum at d'Entremont 1

Oppidum (plural oppida) is a Latin word for the main settlement in any administrative area of ancient Rome. The word comes from ob-pedum, an "enclosed space." This may in turn have come from the Proto-Indo-European word, *pedóm-, meaning an "occupied space" or "footprint."

Julius Caesar called the larger Celtic Iron Age settlements he found in Gaul oppida. The word is now used to describe the large pre-Roman towns that existed across Western and Central Europe. Many oppida grew from hill forts, but not all of them had an important defensive role. The main features of the oppida are:

The development of oppida was an important step in the urbanisation of Europe. They were the first large settlements north of the Mediterranean that could be described as towns. Caesar pointed out that each tribe of Gaul would have several oppida, but that they were not all of equal importance. This suggests that there was some form of hierarchy.

In conquered lands, the Romans took over the oppida to administer the empire, and many became full Roman towns. This often involved a change of location from the hilltop into the plain.

One of the best preserved oppida is at Enserune in France. It was occupied continuously from 6th century BC until the 1st century. Other oppida are now buried beneath large cities, such as Vindobona which is covered by Vienna.

All content from Kiddle encyclopedia articles (including the article images and facts) can be freely used under Attribution-ShareAlike license, unless stated otherwise. Cite this article:
Oppidum Facts for Kids. Kiddle Encyclopedia.