Acropolis of Athens facts for kids

The Acropolis is a flat-topped rock which rises 150 m (512 ft) above sea level in the city of Athens, Greece, with a surface area of about 3 hectares (7.4 acres). It was also known as Cecropia, after the legendary serpent-man, Kekrops or Cecrops, the first Athenian king.

While there is evidence that the hill was inhabited as far back as the fourth millennium BC, it was Pericles (c. 495–429 BC) in the fifth century BC who coordinated the construction of the site's most important present remains including the Parthenon, the Propylaia, the Erechtheion and the Temple of Athena Nike.

The Parthenon and the other buildings were damaged seriously during the 1687 siege by the Venetians during the Morean War when gunpowder being stored in the Parthenon was hit by a cannonball and exploded. 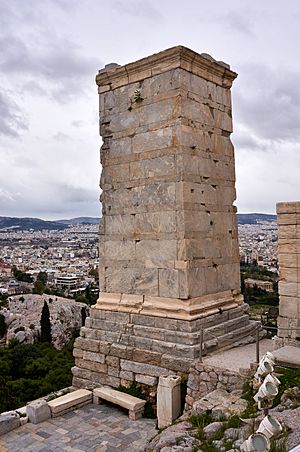 The Pedestal of Agrippa on the Acropolis

Geology of the rock

The Acropolis of Athens

The Acropolis rises sharply from the plain of Attica with steep cliffs on three sides. It is accessible by foot only to the west, where it is linked by a low ridge to the hill of the Areopagus. The Acropolis limestone dates from the upper Jurassic period.

It is formed by a layer of limestone, which is very hard but water-permeable. This rests on a layer of schist-sandstone marl, softer than the limestone but water-impermeable. This leads to the ready formation of artesian springs, as well as sheltered caves at the hill's feet, which was also a factor that attracted human habitation on and around the rock. 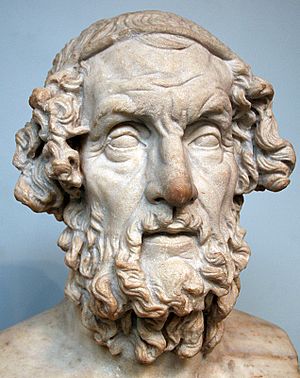 Portrayal of Homer dating to the Hellenistic period

The earliest artifacts from the area point to the Middle Neolithic era, although there have been documented habitations in Attica from the Early Neolithic (6th millennium BC).

The compound was surrounded by a thick Cyclopean circuit wall, possibly between 4.5 m and 6 m in height, consisting of two parapets built with large stone blocks and cemented with an earth mortar called emplekton.

The wall follows typical Mycenaean works in that its gate was arranged at an angle, with a parapet and tower overhanging the incomers' right-hand side, this was done for defensive reasons. There were two lesser approaches up the hill on its north side, consisting of steep, narrow flights of steps cut in the rock.

It was during that time that an earthquake caused a fissure near the northeastern edge, one that ran all the way down to the marl layer and in which water duly collected. An elaborate set of stairs was built and the well was used as a protected source of drinking water during some portion of the Mycenaean period, as it was invaluable in times of siege. 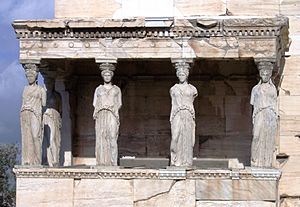 Porch of the Caryatids

The Acropolis might have been spared the violent destruction of other Mycenaean palaces, as there are no signs of fire or other large-scale destruction in what few artifacts of that time survive.

Not much is known as to the precise state of building on the rock leading up to the archaic era, except that the Acropolis was taken over by Kylon in the Kylonian revolt, and twice by Pisistratus. 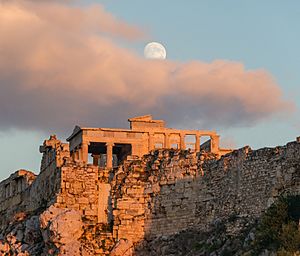 It is known with some certainty that a sizeable temple sacred to Athena Polias (Protectress of the City) was erected by mid-6th century BC. This Doric limestone building, from which many relics survive, is referred to as the "Bluebeard" temple, named after the three-bodied man-serpent sculpture, whose beards were painted dark blue.

The Parthenon was caught unfinished by invading Persians in 480 BC, and was razed to the ground and burnt, along with the Archaios Neos and practically everything else on the rock.

Once the Persian Wars were over, the Athenians brought some order to the location, firstly by ceremonially burying objects of worship and art that were made unsuitable for further use.

This "Persian debris" is the richest archaeological treasure excavated on the Acropolis, as its burial had protected it from further destruction through the ages. 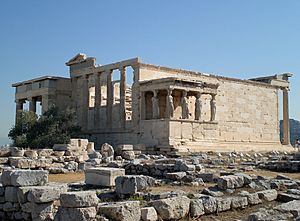 Most of the major temples were rebuilt under the leadership of Pericles during the Golden Age of Athens (460–430 BC). Phidias, a great Athenian sculptor, and Ictinus and Callicrates, two famous architects, were responsible for the reconstruction.

Monuments that have left almost nothing visible to the present day are the Chalkotheke, the Pandroseion, Pandion's sanctuary, Athena's altar, Zeus Polieus's sanctuary and, from Roman times, the circular temple of Augustus and Rome. 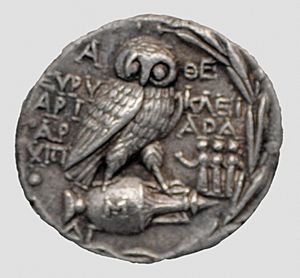 Greek coin from the Panathenaic games

Every four years the Athenians held a festival called the Panathenaea that rivalled the Olympic Games in popularity. During the festival, a procession moved through Athens up to the Acropolis and into the Parthenon (as depicted in the frieze on the inside of the Parthenon).

There, a vast robe of woven wool (peplos) was ceremoniously placed on Phidias' massive ivory and gold statue of Athena.

Within the later tradition of Western Civilization and classical revival, the Acropolis, from at least the mid-18th century on, has often been seen as a key symbol of the Greek legacy and of the glories of Classical Greece. 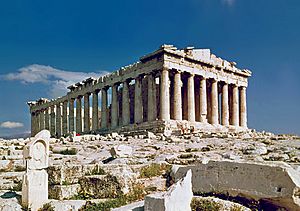 The entrance to the Acropolis was a monumental gateway called the Propylaea. At the near right of the Propylaea is the tiny Temple of Athena Nike.

A bronze statue of Athena, sculpted by Phidias, originally stood at its center. At the center of the acropolis is the Parthenon or Temple of Athena Parthenos (Athena the Virgin). To the left of the Propylaea is the Erechtheum with columns known as caryatids sculpted as figures of women.

There are also the remains of an outdoor theatre called Theatre of Dionysus in which all the extraordinary plays of the Greek dramatists were first performed. 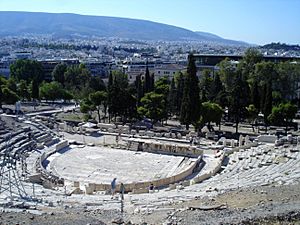 Remains of the Theatre of Dionysus as of 2007

A few hundred metres away, there is the partially reconstructed Theatre of Herodes Atticus, giving a clear picture of how the Theatre of Dionysos must have looked, although both would have had roofs and very elaborate and substantial backdrops to their stages; the Odeum (theatre) of Herodes has a majestic and towering set of arches and pillars with a huge marbled walk-way leading to the stage and the arches would probably have been higher still.

This theatre is used every summer for modern productions of the early plays. Seating an audience of several thousand, the acoustics were, and are, perfect, allowing the Greek audiences to marvel at the early plays of playwrights such as Aeschylus, Sophocles and Euripides. 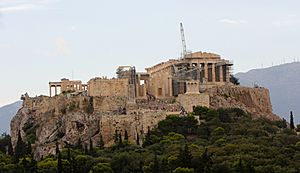 View east toward the Acropolis under construction during summer 2014

The Project began during 1975 but as of 2017 it has almost ground to a halt. The goal of the restoration was to reverse the decay of centuries of pollution, destruction stemming from military use, and misguided past restorations.

The project included collection and identification of all stone fragments, even small ones, from the Acropolis and its slopes and the attempt was made to restore as much as possible using reassembled original material (anastylosis), with new marble from Mount Penteli used sparingly.

All restoration was made using titanium dowels and is designed to be completely reversible, in case future experts decide to change things. A combination of cutting-edge modern technology and extensive research and reinvention of ancient techniques were used. 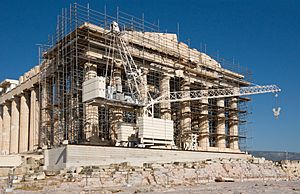 The Parthenon colonnades, largely destroyed by Venetian bombardment during the 17th century, were restored, with many wrongly assembled columns now properly placed. The roof and floor of the Propylaea were partly restored, with sections of the roof made of new marble and decorated with blue and gold inserts, as in the original. Restoration of the Temple of Athena Nike was completed in 2010.

A total of 2,675 tons of architectural members were restored, with 686 stones reassembled from fragments of the originals, 905 patched with new marble, and 186 parts made entirely of new marble. A total of 530 cubic meters of new Pentelic marble were used.

All content from Kiddle encyclopedia articles (including the article images and facts) can be freely used under Attribution-ShareAlike license, unless stated otherwise. Cite this article:
Acropolis of Athens Facts for Kids. Kiddle Encyclopedia.