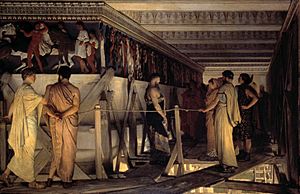 Phidias (circa 480 BC—430 BC), was a Greek sculptor, painter and architect. His Statue of Zeus at Olympia was one of the Seven Wonders of the Ancient World. He also designed the statues of the goddess Athena on the Acropolis. These were the Athena Parthenos inside the Parthenon and the Athena Promachos, a bronze statue of Athena near the entrance to the Acropolis.

All content from Kiddle encyclopedia articles (including the article images and facts) can be freely used under Attribution-ShareAlike license, unless stated otherwise. Cite this article:
Phidias Facts for Kids. Kiddle Encyclopedia.