Statue of Zeus at Olympia facts for kids 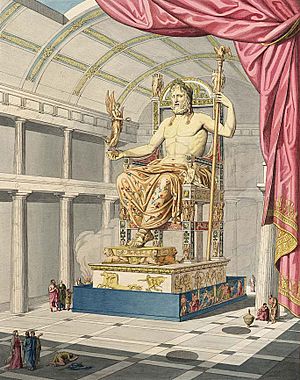 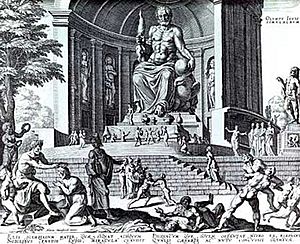 A fanciful reconstruction of Phidias' statue of Zeus, in an engraving made by Philippe Galle in 1572, from a drawing by Maarten van Heemskerck

The Statue of Zeus at Olympia was a giant seated figure, about 12.4 m (41 ft) tall, made by the Greek sculptor Phidias around 435 BC at the sanctuary of Olympia, Greece, and erected in the Temple of Zeus there. Zeus was the sky and thunder god in ancient Greek religion, who ruled as king of the gods of Mount Olympus.

The statue was a chryselephantine sculpture of ivory plates and gold panels on a wooden framework. Zeus sat on a painted cedarwood throne ornamented with ebony, ivory, gold and precious stones. It was one of the Seven Wonders of the Ancient World.

The statue was lost and destroyed during the 5th century AD; details of its form are known only from ancient Greek descriptions and representations on coins.

The statue of Zeus was commissioned by the Eleans, custodians of the Olympic Games, in the latter half of the fifth century BC for their newly constructed Temple of Zeus. Seeking to outdo their Athenian rivals, the Eleans employed the renowned sculptor Phidias, who had previously made the massive statue of Athena Parthenos in the Parthenon.

The statue occupied half the width of the aisle of the temple built to house it. "It seems that if Zeus were to stand up," the geographer Strabo noted early in the 1st century BC, "he would unroof the temple." The Zeus was a chryselephantine sculpture, made with ivory and gold panels on a wooden substructure. No copy in marble or bronze has survived, though there are recognizable but only approximate versions on coins of nearby Elis and on Roman coins and engraved gems.

The 2nd-century AD geographer and traveler Pausanias left a detailed description: the statue was crowned with a sculpted wreath of olive sprays and wore a gilded robe made from glass and carved with animals and lilies. Its right hand held a small chryselephantine statue of crowned Nike, goddess of victory; its left a scepter inlaid with many metals, supporting an eagle. The throne featured painted figures and wrought images and was decorated with gold, precious stones, ebony, and ivory. Zeus' golden sandals rested upon a footstool decorated with an Amazonomachy in relief. The passage underneath the throne was restricted by painted screens.

Pausanias also recounts that the statue was kept constantly coated with olive oil to counter the harmful effect on the ivory caused by the "marshiness" of the Altis grove. The floor in front of the image was paved with black tiles and surrounded by a raised rim of marble to contain the oil. This reservoir acted as a reflecting pool which doubled the apparent height of the statue.

According to the Roman historian Livy, the Roman general Aemilius Paullus (the victor over Macedon) saw the statue and "was moved to his soul, as if he had seen the god in person," while the 1st-century AD Greek orator Dio Chrysostom declared that a single glimpse of the statue would make a man forget all his earthly troubles. 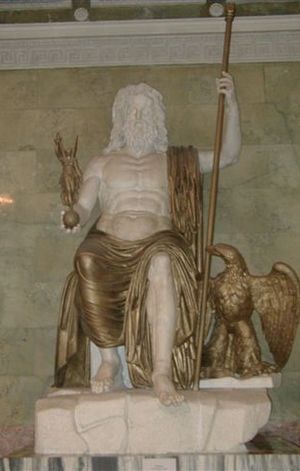 According to a legend, when Phidias was asked what inspired him—whether he climbed Mount Olympus to see Zeus, or whether Zeus came down from Olympus so that Phidias could see him—the artist answered that he portrayed Zeus according to Book One, verses 528 – 530 of Homer's Iliad:

He spoke, the son of Cronos, and nodded his head with the dark brows,
and the immortally anointed hair of the great god
swept from his divine head, and all Olympos was shaken.

The sculptor also was reputed to have immortalised Pantarkes, the winner of the boys' wrestling event at the eighty-sixth Olympiad who was said to have been his "beloved" (eromenos), by carving Pantarkes kalos ("Pantarkes is beautiful") into Zeus's little finger, and by placing a relief of the boy crowning himself at the feet of the statue.

According to Pausanias, "when the image was quite finished Pheidias prayed the god to show by a sign whether the work was to his liking. Immediately, runs the legend, a thunderbolt fell on that part of the floor where down to the present day the bronze jar stood to cover the place."

According to Roman historian Suetonius, the Roman Emperor Caligula gave orders that "such statues of the gods as were especially famous for their sanctity or their artistic merit, including that of Jupiter at Olympia, should be brought from Greece, in order to remove their heads and put his own in their place." Before this could happen, the emperor was assassinated in 41 AD; his death was supposedly foretold by the statue, which "suddenly uttered such a peal of laughter that the scaffolding collapsed and the workmen took to their heels."

In 391 AD, the Christian Roman emperor Theodosius I banned participation in pagan cults and closed the temples. The sanctuary at Olympia fell into disuse. The circumstances of the statue's eventual destruction are unknown. The 11th-century Byzantine historian Georgios Kedrenos records a tradition that it was carried off to Constantinople, where it was destroyed in the great fire of the Palace of Lausus, in 475 AD.

Alternatively, the statue perished along with the temple, which was severely damaged by fire in 425 AD. But earlier loss or damage is implied by Lucian of Samosata in the later 2nd century, who referenced it in Timon: "they have laid hands on your person at Olympia, my lord High-Thunderer, and you had not the energy to wake the dogs or call in the neighbours; surely they might have come to the rescue and caught the fellows before they had finished packing up the loot." 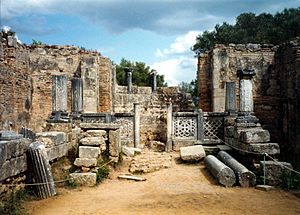 Photo (2005) of Phidias' workshop at Olympia 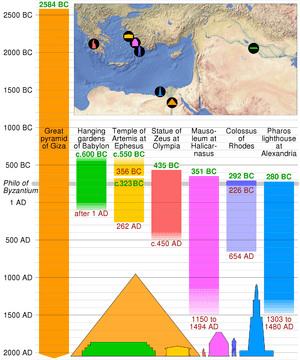 The approximate date of the statue (the third quarter of the 5th century BC) was confirmed in the rediscovery (1954–58) of Phidias' workshop, approximately where Pausanias said the statue of Zeus was constructed. Archaeological finds included tools for working gold and ivory, ivory chippings, precious stones and terracotta moulds. Most of the latter were used to create glass plaques, and to form the statue's robe from sheets of glass, naturalistically draped and folded, then gilded. A cup inscribed "ΦΕΙΔΙΟΥ ΕΙΜΙ" or "I belong to Phidias" was found at the site.

All content from Kiddle encyclopedia articles (including the article images and facts) can be freely used under Attribution-ShareAlike license, unless stated otherwise. Cite this article:
Statue of Zeus at Olympia Facts for Kids. Kiddle Encyclopedia.