For other uses, see Amazon 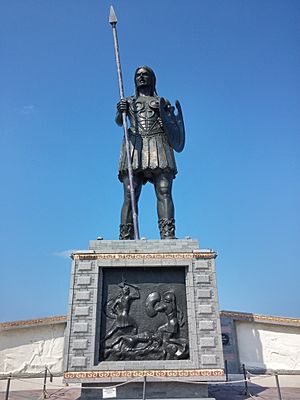 In Greek mythology, the Amazons were a tribe of warrior women believed to live in Asia Minor. Apollonius Rhodius, in his Argonautica, mentions that the Amazons were the daughters of Ares and Harmonia (a nymph of the Akmonian Wood), that they were brutal and aggressive, and their main concern in life was war.

Herodotus and Strabo place them on the banks of the Thermodon River. According to Diodorus, giving the account of Dionysius of Mitylene, the Amazons inhabited Ancient Libya long before they settled along the Thermodon. Migrating from Libya, these Amazons passed through Egypt and Syria, and stopped at the Caïcus in Aeolis, near which they founded several cities.

Later, Diodorus maintains, they established Mytilene a little way beyond the Caïcus. Aeschylus, in Prometheus Bound, places the original home of the Amazons in the country about Lake Maeotis, and from which they moved to Themiscyra on the Thermodon. Homer tells that the Amazons were sought and found somewhere near Lycia.

Notable queens of the Amazons are Penthesilea, who participated in the Trojan War, and her sister Hippolyta, whose magical girdle, given to her by her father Ares, was the object of one of the labours of Heracles. The Amazons fought on the side of Troy against the Greeks during the Trojan War.

Archaeological discoveries of burial sites with female warriors on the Eurasian Steppes suggest that the Scythian women may have inspired the Amazon myth. From the early modern period, their name has become a term for female warriors in general.

Amazons were said to have founded the cities and temples of Smyrna, Sinope, Cyme, Gryne, Ephesus, Pitania, Magnesia, Clete, Pygela, Latoreria and Amastris; according to legend, the Amazons also invented the cavalry. 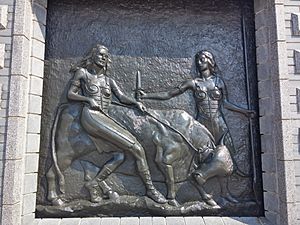 According to ancient sources (Plutarch, Theseus, Pausanias), Amazon tombs could be found frequently throughout what was once known as the ancient Greek world. Some are found in Megara, Athens, Chaeronea, Chalcis, Thessaly at Skotousa, in Cynoscephalae, and statues of Amazons are all over Greece.

The city of Samsun in modern-day Turkey features a recently constructed "Amazon Village" museum, created to bring attention to the legacy of the Amazons and to generate both academic interest and popular tourism. A festival is also held every year in the Terme district of Samsun Province to celebrate the Amazons.

All content from Kiddle encyclopedia articles (including the article images and facts) can be freely used under Attribution-ShareAlike license, unless stated otherwise. Cite this article:
Amazons Facts for Kids. Kiddle Encyclopedia.