An Ancient Libyan; as depicted in the tomb of Seti I

The Latin name Libya (from Greek Λιβύη, Libyē) referred to the region west of the Nile generally corresponding to the modern Maghreb. Its people were ancestors of the modern Berbers. Berbers occupied the area for thousands of years before the beginning of human records in ancient Egypt. Climate changes affected the locations of the settlements.

More narrowly, Libya could also refer to the country immediately west of Egypt, viz. Marmarica (Libya Inferior) and Cyrenaica (Libya Superior). The Libyan Sea or Mare Libycum was the part of the Mediterranean Sea south of Crete, between Cyrene and Alexandria.

In the Hellenistic period, the Berbers were known as Libyans, a Greek term for the inhabitants of the Maghreb. Their lands were called "Libya" and extended from modern Morocco to the western borders of ancient Egypt. Modern Egypt contains the Siwa Oasis, which was part of ancient Libya. Siwi, a Berber language, is still spoken in the area. 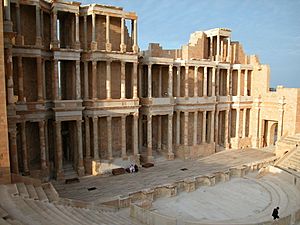 Compared with the history of Egypt, historians know little about the history of Libya, as there are few surviving written records. Information on ancient Libya comes from archaeological evidence and historic sources written by Egyptians neighbors, the ancient Greeks, Romans, and Byzantines, and from Arabs of Medieval times.

Since Neolithic times, the climate of North Africa has become drier. A reminder of the desertification of the area is provided by megalithic remains, which occur in great variety of form and in vast numbers in presently arid and uninhabitable wastelands: dolmens and circles like Stonehenge, cairns, underground cells excavated in rock, barrows topped with huge slabs, and step-pyramid-like mounds. Most remarkable are the trilithons, some still standing, some fallen, which occur isolated or in rows, and consist of two squared uprights standing on a common pedestal that supports a huge transverse beam. In the Terrgurt valley, Cowper says, "There had been originally no less than eighteen or twenty megalithic trilithons, in a line, each with its massive altar placed before it."

In ancient times, the Phoenicians and Carthaginians, the Persian Achaemenid Empire, the armies of Alexander the Great and his Ptolemaic successors from Egypt, then Romans, Vandals, and local representatives of the Byzantine Empire ruled all or parts of Libya. The territory of modern Libya had separate histories until Roman times, as Tripoli and Cyrenaica.

Cyrenaica, by contrast, was Greek before it was Roman. It was also known as Pentapolis, the "five cities" being Cyrene (near the village of Shahat) with its port of Apollonia (Marsa Susa), Arsinoe (Tocra), Berenice (Bengazi) and Barca (Merj). From the oldest and most famous of the Greek colonies the fertile coastal plain took the name of Cyrenaica.

These five cities were also known as the Western Pentapolis; not to be confused with the Pentapolis of the Roman era on the current west Italian coast.

The exact boundaries of Ancient Libya are unknown. It lay west of Ancient Egypt and was known as "Tjehenu" to the Ancient Egyptians. Libya was an unknown territory to the Egyptians: it was the lands of the spirits. 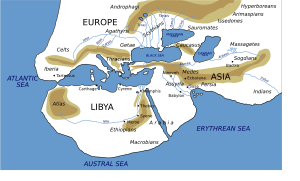 Map of the world according to Herodotus

To the Ancient Greeks, Libya was one of the three known continents along with Asia and Europe. In this sense, Libya was the whole known African continent to the west of the Nile Valley and extended south of Egypt. Herodotus described the inhabitants of Libya as two peoples: The Libyans in northern Africa and the Ethiopians in the south. According to Herodotus, Libya began where Ancient Egypt ended, and extended to Cape Spartel, south of Tangier on the Atlantic coast .

After the Egyptians, the Greeks, Romans, and Byzantines mentioned various other tribes in Libya.

There were many Berber tribes in ancient Libya, including the now extinct Psylli, with the Libu being the most prominent. The ancient Libyans were mainly pastoral nomads, living off their goats, sheep and other livestock. Milk, meat, hides and wool were gathered from their livestock for food, tents and clothing. Ancient Egyptian sources describe Libyan men with long hair, braided and beaded, neatly parted from different sides and decorated with feathers attached to leather bands around the crown of the head while wearing thin robes of antelope hide, dyed and printed, crossing the shoulder and coming down until mid calf length to make a robe. Older men kept long braided beards. Women wore the same robes as men, plaited, decorated hair and both genders wore heavy jewelry. Weapons included bows and arrows, hatchets, spears and daggers.

The Libyan script that was used in Libya was mostly a funerary script. It is difficult to understand, and there are a number of variations.

Ibn Khaldun divided the Berbers into the Batr and the Baranis.

All content from Kiddle encyclopedia articles (including the article images and facts) can be freely used under Attribution-ShareAlike license, unless stated otherwise. Cite this article:
Ancient Libya Facts for Kids. Kiddle Encyclopedia.