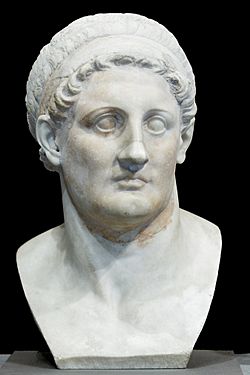 The Ptolemaic dynasty, also known as the Lagids or Lagidae, was a Macedonian Greek royal family who ruled over Egypt. Their rule lasted for 275 years, from 305 BC to 30 BC. They were the last dynasty of ancient Egypt.

Ptolemy, was one of Alexander the Great's generals and deputies. He was appointed satrap of Egypt after Alexander's death in 323 BC. In 305 BC, he declared himself King Ptolemy I, later known as "Soter" (savior). The Egyptians soon accepted the Ptolemies as the successors to the pharaohs of independent Egypt. Unlike their previous rulers under the Achaemenid Empire, they usually lived in Egypt. Ptolemy's family ruled Egypt until the Roman conquest of 30 BC.

All the male rulers of the dynasty took the name Ptolemy. Ptolemaic queens, some of whom were the sisters of their husbands, were usually called Cleopatra, Arsinoe or Berenice. The most famous, was the last queen, Cleopatra VII. She was involved in the Roman political battles between Julius Caesar and Pompey, and later between Octavian and Mark Antony. Her death marked the end of Ptolemaic rule in Egypt.

Dates in brackets represent the ruling dates of the Ptolemaic pharaohs. They often ruled jointly with their wives, who were often also their sisters. Several queens exercised royal authority, but the most famous and successful was Cleopatra VII (51–30 BC), with her two brothers and her son as successive nominal co-rulers. Several systems exist for numbering the later rulers; the one used here is the one most widely used by modern scholars.

Other members of the Ptolemaic dynasty

All content from Kiddle encyclopedia articles (including the article images and facts) can be freely used under Attribution-ShareAlike license, unless stated otherwise. Cite this article:
Ptolemaic dynasty Facts for Kids. Kiddle Encyclopedia.