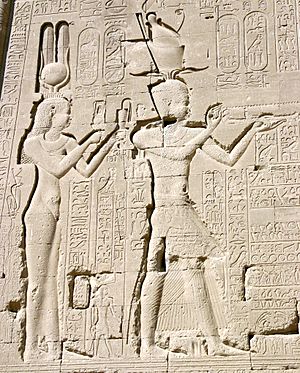 Cleopatra and Caesarion in a drawing at the Temple of Denderah

Ptolemy XV Philopator Philometor Caesar, nicknamed Caesarion (little Caesar; Greek: Πτολεμαίος ΙΕ' Φιλοπάτωρ Φιλομήτωρ Καίσαρ, Καισαρίων; June 23, 47 BC – August, 30 BC) was the son of Cleopatra VII. He ruled Egypt as a child along with Cleopatra until 30 BC. He was murdered by Octavian, who would later become the Roman emperor Augustus.

Caesarion is probably the son of Julius Caesar. If so, he is the only known son of Caesar.

Caesarion was the last king (pharaoh) of the Ptolemaic dynasty of Egypt.

All content from Kiddle encyclopedia articles (including the article images and facts) can be freely used under Attribution-ShareAlike license, unless stated otherwise. Cite this article:
Caesarion Facts for Kids. Kiddle Encyclopedia.