Cleopatra, Queen of Egypt, was one of the most famous women in history. Her full name was Cleopatra VII Thea Philopator (69 BC – 12 August 30 BC). She was the last of the Pharaohs set up in Egypt by Alexander the Great. By descent, she was a Macedonian Princess. After her death, Egypt became the Roman province of Aegyptus.

The main historical source for her life is Plutarch's Life of Antony, available in translations. Antony and Cleopatra is the famous tragedy by William Shakespeare, believed to have been written sometime between 1603 and 1607. It was first printed in 1623.

Cleopatra made some enemies amongst the courtiers. The reign of Cleopatra was ended by a cabal of courtiers, led by the eunuch Pothinus. They removed Cleopatra from power, and made Ptolemy sole ruler, in about 51 to 48 BC. She had to leave the country. Ptolemy was king, but because he was still a boy, Pothinus and his friends were the real leaders of Egypt.

At that time, two Roman generals were fighting to be the leaders of the Roman Republic. They were Pompey and Julius Caesar. Julius Caesar defeated Pompey at the Battle of Pharsalus in Greece, 48 BC. Pompey fled to Egypt from Pharsalus, and was murdered by the orders of Ptolemy.

Ptolemy and his supporters thought Caesar would be pleased, but that was a big mistake. Caesar had pardoned many of the senators who fought against him. His reason was to lay the ground for peace in Rome. The murder of Pompey cut right across Caesar's plans. Worse, Pompey was a Roman consul, and the widower of Caesar's only daughter, Julia. Worse still, Pompey was beheaded in front of his fifth wife and children, who were on the ship from which he had just disembarked. This made sure that Pompey's powerful family and supporters would never forget, and would always be enemies of Caesar. 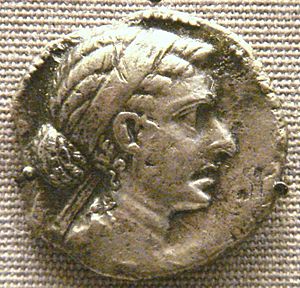 A coin of Cleopatra VII

Then Caesar came to Alexandria, the capital of Egypt. Economically, Egypt was a bread-basket which could feed the people of Rome. Cleopatra received Caesar in her own unique way. She lay down on a carpet. Then her servants rolled up the carpet with Cleopatra inside. Then the carpet was taken to the palace where Caesar was staying. The guards saw some people carrying a carpet and they did not stop them. They carried the carpet to Caesar. Then Cleopatra came out of the carpet. Caesar fell in love with her and they became lovers. At the time, Cleopatra was 21 years old and Caesar was 52 years old.

Caesar decided to make Cleopatra queen again. Ptolemy did not like that. There was a lot of fighting, but Caesar won. Ptolemy tried to leave, but he fell in the river Nile and drowned. Another younger brother became king, but Cleopatra was again the real leader of Egypt. Cleopatra did not marry Julius Caesar, but they did have a son. He was called Caesarion.

Soon after Caesarion was born, Caesar was murdered as he walked to the Senate in Rome. Cleopatra and her entourage were in Rome when Caesar was assassinated on 15 March 44 BC. Cleopatra fled back to Egypt. 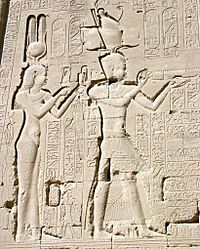 Cleopatra VII and her son Caesarion at the Temple of Dendera

Coin of Antony and Cleopatra

Mark Antony, who was Caesar's military commander, and Octavian, Caesar's legal heir, defeated the group which had conspired against Caesar. This group was led by Brutus and Cassius, who took their army to the Eastern Mediterranean, and controlled much of that area. The issue was finally settled by the Battle of Philippi, fought in Macedonia.

Caesar's place was taken by three joint Consuls, the Second Triumvirate. Their names were Octavian, Mark Antony and Lepidus. Lepidus was a minor character, and the long-term fate of the Empire was decided by a conflict between Antony and Octavian. Mark Antony came to see Cleopatra, and they fell in love, though Antony already had a wife. Cleopatra had three more children. Two were twins, and the father of all three was Mark Antony.

The conflict between Octavian and Antony became serious, and soon there was war. Cleopatra was wealthy, and she used her money to help Antony. But Octavian won the war. He became the ruler of the Roman Empire and was known as Augustus or Caesar Augustus. He took control of Egypt from Cleopatra. After her kingdom was conquered, she committed suicide by letting an asp (a poisonous snake) bite her. Antony also committed suicide.

Ceasarion was murdered by Octavian, and her other children were taken as prisoners to Rome. Two of them died of illness, but her daughter, Cleopatra Selene II, married an African King Juba II of Numidia. The couple were sent to Mauritania to rule by Octavian. They lived a full life there, and had children.

There are many stories told of how rich Cleopatra was, but we cannot be sure if these are true. For example, one story says that she took baths in milk, to make her skin softer. Another story says that she made a bet with Antony that she could make the most expensive meal ever. To win the bet, she took a pearl earring, dissolved it in vinegar, and drank it.

The ancient sources, particularly the Roman ones, are in general agreement that Cleopatra killed herself by inducing an asp (Egyptian cobra) to bite her. The oldest source is Strabo, who was alive at the time of the event and might even have been in Alexandria. He says that there are two stories — that she applied a toxic ointment or that she was bitten by an asp — but he said in his writings that he was not sure if Cleopatra poisoned herself or was murdered.

Several Roman poets writing within ten years of the event mention bites by two asps, as does Florus, a historian, some 150 years later. Velleius, sixty years after the event, also refers to an asp. Other authors have questioned these historical accounts, stating that it is possible that Augustus had her killed.

In 2010, German historian Christoph Schaefer challenged all other theories, declaring that the queen had actually been poisoned and died from drinking a mixture of poisons. After studying historical texts and consulting with toxicologists, the historian concluded that the asp could not have caused the quick and pain-free death claimed by most sources, since the asp venom paralyses parts of the body, starting with the eyes, before causing death. Living when and where she did, Cleopatra would have known of the violent and painful effects of an asp's venomous bite, so it is unlikely that it was the cause of her death.

All content from Kiddle encyclopedia articles (including the article images and facts) can be freely used under Attribution-ShareAlike license, unless stated otherwise. Cite this article:
Cleopatra Facts for Kids. Kiddle Encyclopedia.