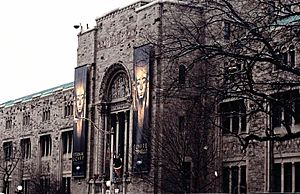 East-facing façade of the Royal Ontario Museum, built in 1933.

The Royal Ontario Museum or ROM, is a major museum for culture and natural history in the city of Toronto, Ontario, Canada.

It is the largest museum in Canada and fifth largest in North America. It has more than six million things on display and over 40 galleries. It has notable collections of dinosaurs, Near Eastern and African art, East Asian art, European history, and Canadian history.

All content from Kiddle encyclopedia articles (including the article images and facts) can be freely used under Attribution-ShareAlike license, unless stated otherwise. Cite this article:
Royal Ontario Museum Facts for Kids. Kiddle Encyclopedia.