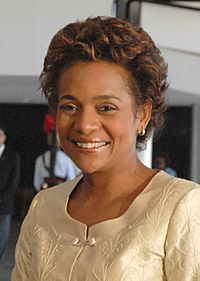 Her Excellency the Rt. Hon. Michaëlle Jean (born September 6, 1957, in Port-au-Prince, Haiti) is a Haitian-born Canadian politician and journalist. She was the Governor General of Canada, replacing Adrienne Clarkson on 27 September 2005, until 1 October 2010 when David Lloyd Johnston took over.

Jean was formally appointed Special Envoy for Haiti for the United Nations Educational, Scientific and Cultural Organization on November 8, 2010, for a four-year term.

All content from Kiddle encyclopedia articles (including the article images and facts) can be freely used under Attribution-ShareAlike license, unless stated otherwise. Cite this article:
Michaëlle Jean Facts for Kids. Kiddle Encyclopedia.