Louise Mushikiwabo (born 22 May 1961) is the fourth and current Secretary General of Organisation internationale de la Francophonie. She previously served as the Minister of Foreign Affairs and Cooperation of Rwanda from 2009 to 2018. She also served as Government Spokesperson. She had previously been Minister of Information.

On 12 October 2018, she was elected for a four-year term for the position of Secretary General of Organisation internationale de la Francophonie (OIF) at the Summit of Francophonie in Yerevan, Armenia. 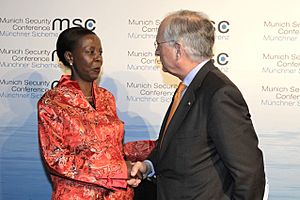 All content from Kiddle encyclopedia articles (including the article images and facts) can be freely used under Attribution-ShareAlike license, unless stated otherwise. Cite this article:
Louise Mushikiwabo Facts for Kids. Kiddle Encyclopedia.