Kigali is the capital and largest city of Rwanda. It is near the nation's geographic centre. The city has been Rwanda's economic, cultural, and transport hub since it became capital at independence in 1962. The city hosts the main residence and offices of the President of Rwanda and government ministries. The city is within the province of Kigali City, which was enlarged in January 2006, as part of local government reorganisation in the country. Kigali's city limits cover the whole province; it is consolidated. The city's urban area covers about 70% of the municipal boundaries. 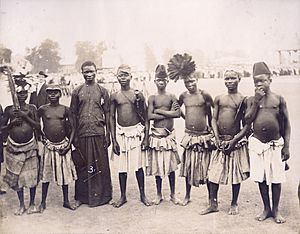 The earliest inhabitants of what is now Rwanda were the Twa, a group of aboriginal pygmy hunter-gatherers who settled the area between 8000 and 3000 BC and remain in the country today. They were followed between 700 BC and AD 1500 by a number of Bantu groups, including the Hutu and Tutsi, who began clearing forests for agriculture. According to oral history the Kingdom of Rwanda was founded in the 14th century on the shores of Lake Muhazi, around 40 kilometres (25 mi) east of modern Kigali. 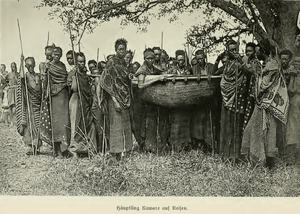 At that time Rwanda was a small state in a loose confederation with larger and more powerful neighbours, Bugesera and Gisaka. By playing these neighbours against each other, the early kingdom flourished in the area, expanding westwards towards Lake Kivu and taking the Kigali area in the process. In the late 16th or early 17th centuries, the kingdom of Rwanda was invaded by the Banyoro and the kings forced to flee westward, leaving Kigali and eastern Rwanda in the hands of Bugesera and Gisaka. 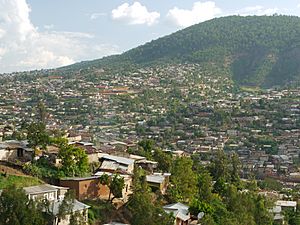 Suburb of Kigali with Mt Kigali in the background

Kigali is located in the centre of Rwanda. Kigali lies in a region of rolling hills, with a series of valleys and ridges joined by steep slopes. It lies between the two mountains of Mount Kigali and Mount Jali, both of which have altitudes over 1,800 m (5,906 ft). Geologically, the city lies in a granitic and metasedimentary region, with lateritic soils on the hills and alluvial soils in the valleys.

The Nyabarongo River, part of the upper headwaters of the Nile, forms the western and southern borders of the administrative city of Kigali, this river lies somewhat outside the built-up urban area. The largest river running through the city is the Nyabugogo River. The rivers are flanked by wetlands, which act as a water store and flood protection for the city, although these are under threat from agriculture and development. 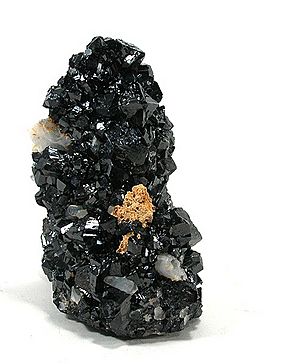 Mines for tin ore (cassiterite) have operated nearby, and the city built a smelting plant in the 1980s. Business in Rwanda has been growing in the 21st century, and many new buildings have arisen across the city, including the BCDI Tower, Centenary House, Kigali City Tower and Kigali Convention Centre. Tourism provides important input into the economy. The city's biggest employment sector is agriculture, fishing and forestry. 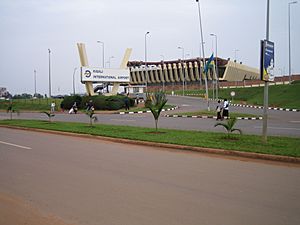 Under a master plan for 2040, Kigali will be decentralised, with business, shopping, and leisure districts, and suburbs. The plan calls for skyscrapers, arching pedestrian walkways and green spaces to be built, alongside amenities such as fountains and a wetlands conservation area. In addition, there will be an effective public transportation network. However, among the most pressing problems is affordable housing for the majority of the city's population, and a number of schemes are under consideration. The city's population of about 1.2 million is expected to triple by that time.

The city has an international airport, Kigali International Airport, with passenger flights to (among others) Amsterdam, Brussels, Nairobi, Entebbe, Johannesburg, Istanbul and Mumbai. The airport is somewhat limited by its location on the top of a hill, and a brand new one is currently being built in the Nyamata area, some 40 km (25 mi) from Kigali.

All content from Kiddle encyclopedia articles (including the article images and facts) can be freely used under Attribution-ShareAlike license, unless stated otherwise. Cite this article:
Kigali Facts for Kids. Kiddle Encyclopedia.