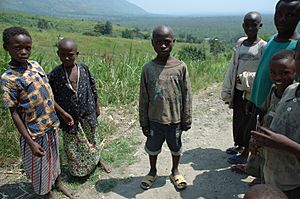 Hutu and other Rwandan children in Virunga National Park.

The Hutu or Abahutu are a Central African ethnic group. They live mainly in Rwanda and Burundi.

The Hutu are the largest of the three ethnic groups in Burundi and Rwanda. The United States Central Intelligence Agency says 84% of Rwandans and 85% of Burundians are Hutu. Other sources have found different statistics. The division between the Hutu and the Tutsi (the larger of the other two groups) is mainly based on social class, not ethnicity. There are no differences in language, culture or appearance between them.

All content from Kiddle encyclopedia articles (including the article images and facts) can be freely used under Attribution-ShareAlike license, unless stated otherwise. Cite this article:
Hutu Facts for Kids. Kiddle Encyclopedia.