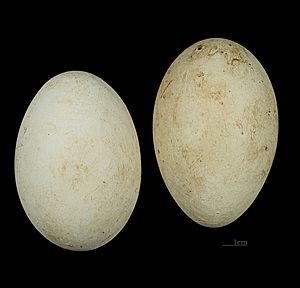 Eggs of the grey crowned crane 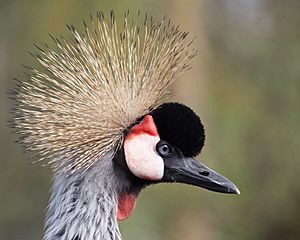 The grey crowned crane is about 1 m (3.3 ft) tall, weighs 3.5 kg (7.7 lbs), and has a wingspan of 2 m (6.5 ft). Its body plumage is mainly grey. The wings are predominantly white, but contain feathers with a range of colours. The head has a crown of stiff golden feathers. The sides of the face are white, and there is a bright red inflatable throat pouch. The bill is relatively short and grey, and the legs are black. They have long legs for wading through the grasses. The feet are large, yet slender, adapted for balance rather than defence or grasping. The sexes are similar, although males tend to be slightly larger. Young birds are greyer than adults, with a feathered buff face.

This species and the black-crowned crane are the only cranes that can roost in trees, because of a long hind toe that can grasp branches. This trait is assumed to be an ancestral trait among the cranes, which has been lost in the other subfamily. Crowned cranes also lack a coiled trachea and have loose plumage compared to the other cranes. 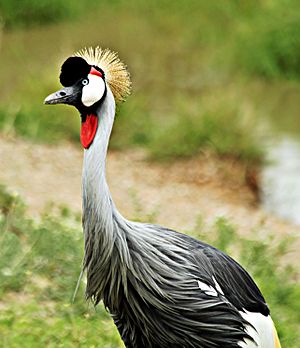 It occurs in dry savannah in Africa south of the Sahara, although it nests in somewhat wetter habitats. They can also be found in marshes, cultivated lands and grassy flatlands near rivers and lakes in Uganda and Kenya and as far south as South Africa. This animal does not have set migration patterns, and birds nearer the tropics are typically sedentary. Birds in more arid areas, particularly Namibia, make localised seasonal movements during drier periods.

The grey crowned crane has a breeding display involving dancing, bowing, and jumping. It has a booming call which involves inflation of the red gular sac. It also makes a honking sound quite different from the trumpeting of other crane species. Both sexes dance, and immature birds join the adults. Dancing is an integral part of courtship, but also may be done at any time of the year.

These cranes are omnivores, eating plants, seeds, grain, insects, frogs, worms, snakes, small fish and the eggs of aquatic animals. Stamping their feet as they walk, they flush out insects which are quickly caught and eaten. The birds also associate with grazing herbivores, benefiting from the ability to grab prey items disturbed by antelopes and gazelles. They spend their entire day looking for food. At night, the crowned crane spends its time in the trees sleeping and resting.

Eggs of Balearica regulorum gibbericeps at the MHNT 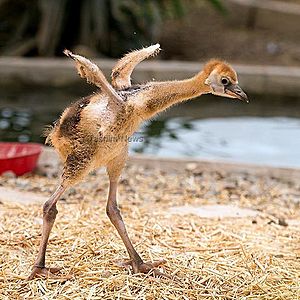 A chick in Tehran Birds Garden

Grey crowned cranes time their breeding season around the rains, although the effect varies geographically. In East Africa the species breeds year-round, but most frequently during the drier periods, whereas in Southern Africa the breeding season is timed to coincide with the rains. During the breeding season, pairs of cranes construct a large nest; a platform of grass and other plants in tall wetland vegetation. The grey crowned crane lays a clutch of 2-5 glossy, dirty-white eggs, which are incubated by both sexes for 28–31 days. Chicks are precocial, can run as soon as they hatch, and fledge in 56–100 days.

Although the grey crowned crane remains common over some of its range, it faces threats to its habitat due to drainage, overgrazing, and pesticide pollution. Their global population is estimated to be between 58,000 and 77,000 individuals. In 2012 it was uplisted from vulnerable to endangered by the IUCN.

The grey crowned crane is the national bird of Uganda and features in the country's flag and coat of arms.

All content from Kiddle encyclopedia articles (including the article images and facts) can be freely used under Attribution-ShareAlike license, unless stated otherwise. Cite this article:
Grey crowned crane Facts for Kids. Kiddle Encyclopedia.