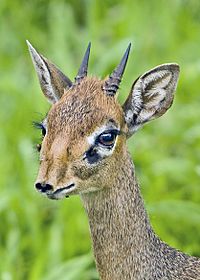 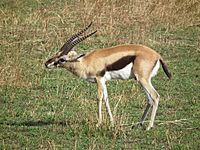 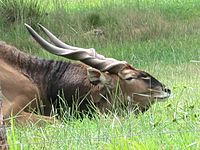 Eland are the largest antelopes.

Antelope is a term for many even-toed ungulate species. This is not a strict taxonomic term; they are not a clade. Antelope is a 'wastebasket taxon' in the family Bovidae. It includes the old-world species which are not cattle, sheep, buffalo, bison, or goats.

Antelope are found mostly in Africa below the Sahara, and parts of Asia. No antelope are native to North America: the pronghorn is a member of the family Antilocapridae, another family. True antelope have horns which are unbranched and never shed, while Pronghorns have branching horns, and shed annually.

There are 91 species of antelope, most of which are native to Africa, in about 30 genera. A group of antelope is called a herd.

Species of forest, woodland, or bush tend to be sedentary, but many of the plains species undertake huge migrations. These migrations enable grass-eating species to follow the rains and therefore their food supply. The gnus and gazelles of East Africa perform some of the most impressive mass migratory circuits of all mammals.

All bovids have even-toed hooves, horizontal pupils, ruminating guts, and (in at least the males) bony horns. Many antelope are sexually dimorphic. In most species, both sexes have horns, but those of males tend to be larger. There is a tendency for males to be larger than the females

Horns are not shed and are not made of bone, which distinguishes them from antlers. Gazelles and springbok are known for their speed and leaping abilities. Even larger antelope, such as elands, and kudus, are capable of jumping 8 feet (2.4 m) or greater, although their running speed is restricted by their greater mass.

All content from Kiddle encyclopedia articles (including the article images and facts) can be freely used under Attribution-ShareAlike license, unless stated otherwise. Cite this article:
Antelope Facts for Kids. Kiddle Encyclopedia.