The Springbok Antelope (Antidorcas marsupialis) is a medium sized brown and white gazelle that stands about 75 centimetres (30 in) high. It is in the same family as antelope and goats. They are the national animal of South Africa and live in the Savannah Biome.

Dark stripes extend across the white face, from the corner of the eyes to the mouth. A dark patch marks the forehead. In juveniles, the stripes and the patch are light brown. The ears, narrow and pointed, measure 15–19 cm (5.9–7.5 in). Typically light brown, the springbok has a dark reddish-brown band running horizontally from the upper foreleg to the edge of the buttocks, separating the dark back from the white underbelly. The tail (except the terminal black tuft), buttocks, the insides of the legs and the rump are all white. Two other varieties – pure black and pure white forms – are artificially selected in some South African ranches. Though born with a deep black sheen, adult black springbok are two shades of chocolate-brown and develop a white marking on the face as they mature. White springbok, as the name suggests, are predominantly white with a light tan stripe on the flanks.

The three subspecies also differ in their colour. A. m. angolensis has a brown to tawny coat, with thick, dark brown stripes on the face extending two-thirds down to the snout. While the lateral stripe is nearly black, the stripe on the rump is dark brown. The medium brown forehead patch extends to eye level and is separated from the bright white face by a dark brown border. A brown spot is seen on the nose. A. m. hofmeyri is a light fawn, with thin, dark brown face stripes. The stripes on the flanks are dark brown to black, and the posterior stripes are moderately brown. The forehead patch, dark brown or fawn, extends beyond the level of the eyes and mixes with the white of the face without any clear barriers. The nose may have a pale smudge. A. m. marsupialis is a rich chestnut brown, with thin, light face stripes. The stripe near the rump is well-marked, and that on the flanks is deep brown. The forehead is brown, fawn, or white, the patch not extending beyond the eyes and having no sharp boundaries. The nose is white or marked with brown.

The skin along the middle of the dorsal side is folded in, and covered with 15 to 20 cm (6 to 8 in) white hair erected by arrector pili muscles (located between hair follicles). This white hair is almost fully concealed by the surrounding brown hairs until the fold opens up, and this is a major feature distinguishing this antelope from gazelles. Springbok differ from gazelles in several other ways; for instance, springbok have two premolars on both sides of either jaw, rather than the three observed in gazelles. This gives a total of 28 teeth in the springbok, rather than 32 of gazelles. Other points of difference include a longer, broader, and rigid bridge to the nose and more muscular cheeks in springbok, and differences in the structure of the horns. 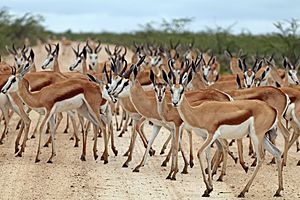 A herd on the road
Etosha National Park, Namibia

Springbok are mainly active around dawn and dusk. Activity is influenced by weather; springbok can feed at night in hot weather, and at midday in colder months. They rest in the shade of trees or bushes, and often bed down in the open when weather is cooler. The social structure of the springbok is similar to that of Thomson's gazelle. Mixed-sex herds or harems have a roughly 3:1 sex ratio; bachelor individuals are also observed. In the mating season, males generally form herds and wander in search of mates. Females live with their offspring in herds, that very rarely include dominant males. Territorial males round up female herds that enter their territories and keep out the bachelors; mothers and juveniles may gather in nursery herds separate from harem and bachelor herds. After weaning, female juveniles stay with their mothers until the birth of their next calves, while males join bachelor groups. 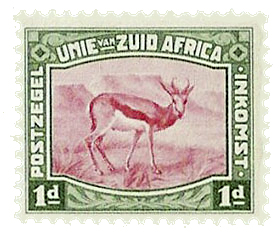 A study of vigilance behaviour of herds revealed that individuals on the borders of herds tend to be more cautious; vigilance decreases with group size. Group size and distance from roads and bushes were found to have major influence on vigilance, more among the grazing springbok than among their browsing counterparts. Adults were found to be more vigilant than juveniles, and males more vigilant than females. Springbok passing through bushes tend to be more vulnerable to predator attacks as they can not be easily alerted, and predators usually conceal themselves in bushes. Another study calculated that the time spent in vigilance by springbok on the edges of herds is roughly double that spent by those in the centre and the open. Springbok were found to be more cautious in the late morning than at dawn or in the afternoon, and more at night than in the daytime. Rates and methods of vigilance were found to vary with the aim of lowering risk from predators. 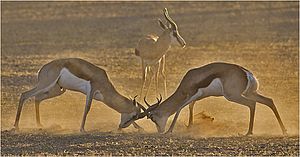 Springbok locking horns in a fight

During the rut, males establish territories, ranging from 10 to 70 hectares (25 to 173 acres), which they mark by urinating and depositing large piles of dung. Males in neighbouring territories frequently fight for access to females, which they do by twisting and levering at each other with their horns, interspersed with stabbing attacks. Females roam the territories of different males. Outside of the rut, mixed-sex herds can range from as few as three to as many as 180 individuals, while all-male bachelor herds are of typically no more than 50 individuals. Harem and nursery herds are much smaller, typically including no more than 10 individuals. 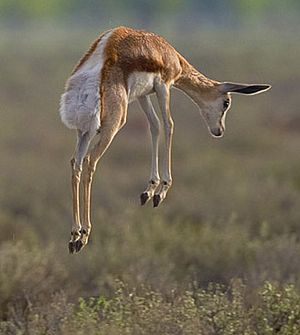 In earlier times, when large populations of springbok roamed the Kalahari desert and Karoo, millions of migrating springbok formed herds hundreds of kilometres long that could take several days to pass a town. These mass treks, known as trekbokking in Afrikaans, took place during long periods of drought. Herds could efficiently retrace their paths to their territories after long migrations. Trekbokking is still observed occasionally in Botswana, though on a much smaller scale than earlier.

Springbok often go into bouts of repeated high leaps of up to 2 m (6 ft 7 in) into the air – a practice known as pronking (derived from the Afrikaans pronk, "to show off") or stotting. In pronking, the springbok performs multiple leaps into the air in a stiff-legged posture, with the back bowed and the white flap lifted. When the male shows off his strength to attract a mate, or to ward off predators, he starts off in a stiff-legged trot, leaping into the air with an arched back every few paces and lifting the flap along his back. Lifting the flap causes the long white hairs under the tail to stand up in a conspicuous fan shape, which in turn emits a strong scent of sweat. Although the exact cause of this behaviour is unknown, springbok exhibit this activity when they are nervous or otherwise excited. The most accepted theory for pronking is that it is a method to raise alarm against a potential predator or confuse it, or to get a better view of a concealed predator; it may also be used for display. Springbok are very fast antelopes, clocked at 88 km/h (55 mph). They generally tend to be ignored by carnivores unless they are breeding. Caracals, cheetahs, leopards, spotted hyenas, and wild dogs are major predators of the springbok. Southern African wildcats, black-backed jackals, black eagles, martial eagles, and tawny eagles target juveniles. Springbok are generally quiet animals, though they may make occasional low-pitched bellows as a greeting and high-pitched snorts when alarmed.

All content from Kiddle encyclopedia articles (including the article images and facts) can be freely used under Attribution-ShareAlike license, unless stated otherwise. Cite this article:
Springbok Facts for Kids. Kiddle Encyclopedia.