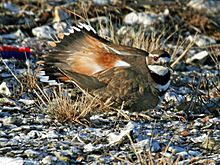 Red Deer shed and replace their antlers every year

Display is a form of animal behaviour, linked to survival of the species in various ways.

A related function is armament (horns, teeth) exhibited and used by 'tournament' species. In these species, males fight to gain the 'right' to breed. The display part of the process is a mechanism for younger males to avoid being damaged by prime males. Instinctive behaviour prompts lesser males to leave the field. Peafowl, deer, antelope and elephant seals are good examples.

The other main function is in species which have territorial display behaviour. This may preserve a foraging or hunting territory for its family or group.

All content from Kiddle encyclopedia articles (including the article images and facts) can be freely used under Attribution-ShareAlike license, unless stated otherwise. Cite this article:
Display (zoology) Facts for Kids. Kiddle Encyclopedia.