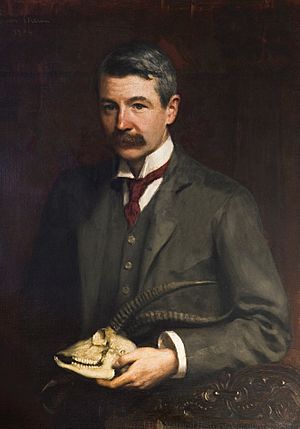 Thomas worked at the Natural History Museum in their mammals department. He described about 2,000 new species and sub-species for the first time. He was given a job in the Museum Secretary's office in 1876. In 1878 he moved to the Zoological Department. In 1891 Thomas married a woman who was an heiress to a large amount of money. Having this money allowed him to hire mammal collectors and to give their specimens to the museum. In 1896 when William Henry Flower took control of the Department he hired Richard Lydekker to rearrange the exhibitions. This gave Thomas the time to concentrate on these new specimens. He died in 1929 when he was 71 years old. This was not long after the death of his wife.

All content from Kiddle encyclopedia articles (including the article images and facts) can be freely used under Attribution-ShareAlike license, unless stated otherwise. Cite this article:
Oldfield Thomas Facts for Kids. Kiddle Encyclopedia.