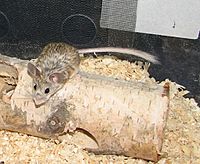 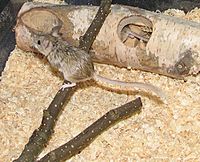 Mouse-like hamster using its tail for balance while standing on a branch (a feat difficult for hamsters).

Mouse-like hamsters are a group of small rodents found in Syria, Azerbaijan, Iran, Turkmenistan, Afghanistan, and Pakistan. They are found in rocky and slightly high areas in desert regions.

The mouse-like hamsters are not real hamsters, although they look like hamsters. They were once thought to be hamsters based on the shape of their teeth, but they do not have the cheek pouches, and short tail of the true hamsters. All animals in this genus were part of the same species before, Calomyscus bailwardi, but they are now separate species because they have big differences in chromosome number, skull length and weight, and other differences.

Mouse-like hamsters live the longest of all the mouse species. They have been recorded as living 9 years, 3 months and 18 days in captivity. They regularly live over 4 years in captivity. The species which lives the second longest in the muroids lives 7 years, 8 months, which is the Canyon Mouse, Peromyscus crinitus.

All content from Kiddle encyclopedia articles (including the article images and facts) can be freely used under Attribution-ShareAlike license, unless stated otherwise. Cite this article:
Mouse-like hamsters Facts for Kids. Kiddle Encyclopedia.