Hamsters are rodents belonging to the subfamily Cricetinae. The subfamily contains about 25 species in six or seven genera. They have become established as popular small house pets. They are a bit like a mouse. Wild hamsters live in the desert, but people all over the world keep domesticated hamsters as pets.

In the wild, hamsters are crepuscular and stay underground during the day. They feed on seeds, fruits, and vegetation, and occasionally eat burrowing insects. Hamsters are distinguished by their large cheek pouches, and relatively short tail. They use their long cheek pouches (extending to their shoulders) to carry food back to their burrows. 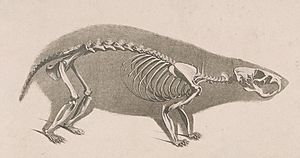 Hamsters are typically stout-bodied, with tails shorter than body length, and have small, furry ears, short, stocky legs, and wide feet. They have thick, silky fur, which can be long or short, colored black, grey, honey, white, brown, yellow, red, or a mix, depending on the species. Two species of hamster belonging to the genus Phodopus, Campbell's dwarf hamster (P. campbelli) and the Djungarian hamster (P. sungorus), and two of the genus Cricetulus, the Chinese striped hamster (C. barabensis) and the Chinese hamster (C. griseus) have a dark stripe down their heads to their tails. The species of genus Phodopus are the smallest, with bodies 5.5 to 10.5 cm (2.2 to 4.1 in) long; the largest is the European hamster (Cricetus cricetus), measuring up to 34 cm (13.4 in) long, not including a short tail of up to 6 cm (2.4 in). 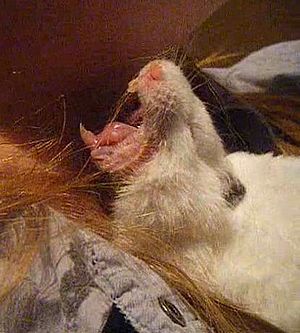 The hamster tail can be difficult to see, as it is usually not very long (about 1/6 the length of the body), with the exception of the Chinese hamster, which has a tail the same length as the body. One rodent characteristic that can be highly visible in hamsters is their sharp incisors; they have an upper pair and lower pair which grow continuously throughout life, so must be regularly worn down. Hamsters are very flexible, but their bones are somewhat fragile. They are extremely susceptible to rapid temperature changes and drafts, as well as extreme heat or cold.

Hamsters have poor eyesight; they are nearsighted and colorblind. Hamsters have scent glands on their flanks (and abdomens in Chinese and dwarf hamsters) which they rub against the substrate, leaving a scent trail. Hamsters also use their sense of smell to distinguish between the sexes, and to locate food. They are also particularly sensitive to high-pitched noises and can hear and communicate in the ultrasonic range.

Hamsters are omnivores. Although pet hamsters can survive on a diet of exclusively commercial hamster food, other items, such as vegetables, fruits, seeds, and nuts, can be given. Hamsters in the Middle East have been known to hunt in packs to find insects for food. Hamsters are hindgut fermenters and eat their own feces (coprophagy) to recover nutrients digested in the hindgut, but not absorbed. 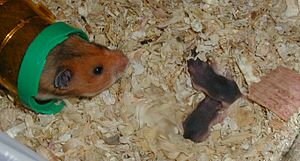 A mother Syrian hamster with pups less than one week old

A behavioral characteristic of hamsters is food hoarding. They carry food in their spacious cheek pouches to their underground storage chambers. When full, the cheeks can make their heads double, or even triple in size. 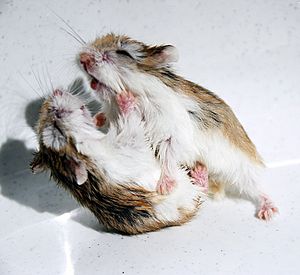 Most hamsters are strictly solitary. If housed together, acute and chronic stress may occur, and they may fight fiercely, sometimes fatally. Dwarf hamster species may tolerate conspecifics. Russian hamsters form close, monogamous bonds with their mates, and if separated, they may become very depressed. This happens especially in males. Males will become inactive, eat more, and even show some behavioral changes similar to some types of depression in humans. This can even cause obesity in the hamster. 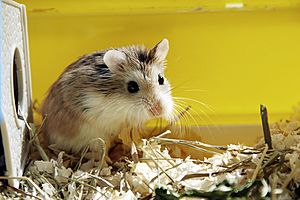 All hamsters are excellent diggers, constructing burrows with one or more entrances, with galleries connected to chambers for nesting, food storage, and other activities. They use their fore- and hindlegs, as well as their snouts and teeth, for digging. In the wild, the burrow buffers extreme ambient temperatures, offers relatively stable climatic conditions, and protects against predators.

Syrian hamsters dig their burrows generally at a depth of 0.7 m. A burrow includes a steep entrance pipe (4–5 cm in diameter), a nesting and a hoarding chamber and a blind-ending branch for urination. Laboratory hamsters have not lost their ability to dig burrows; in fact, they will do this with great vigor and skill if they are provided with the appropriate substrate.

Wild hamsters will also appropriate tunnels made by other mammals; the Djungarian hamster, for instance, uses paths and burrows of the pika. 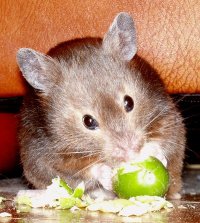 There are six main types of hamsters: the Syrian hamster (the kind most people have as pets), winter whites, campbells, the Russian dwarf hamster (a hybrid of winter white and campbell hamsters), winter whites and campbells are two type of Russian ( despite what many pet shops say), the Chinese hamster, and the Roborovski hamster. The Chinese hamster has a long tail. All Syrian hamsters are the descendants of 12 baby hamsters found in Syria in 1930.

Pet hamsters like to live in cages with wood shavings or recycled newspaper (only if non-toxic). Fluffy bedding is dangerous for hamsters. Plain toilet paper is also a cheap, safe option, but not straw as it is very dry and they may choke on it. Hamsters eat mostly hamster food sold at a pet shop, but they also eat almost any vegetables and fruits in very tiny portions. Hamsters store food in natural pouches in the sides of their mouths.

Because they are rodents, Hamster incisors grow constantly. They need wooden blocks and hard food to prevent the teeth from growing too much. Most hamsters also have a wheel to run on for exercise. A 6 inch (15 cm) wheel is recommended for most dwarf hamsters, and at least an eight-inch (20 cm) wheel for Syrians. Some people get other kinds of exercise equipment for their hamsters, like a "hamster ball" in which the hamster can roll around the floor, or a long network of tubes with air holes for it to crawl through. They should live in an aquarium (without water) or cage. Hamsters are not recommended for young children as they are fragile. You have to be careful about putting boy hamsters togehter as they are very territorial and can fight.

All content from Kiddle encyclopedia articles (including the article images and facts) can be freely used under Attribution-ShareAlike license, unless stated otherwise. Cite this article:
Hamster Facts for Kids. Kiddle Encyclopedia.