The Roborovski hamster (Phodopus roborovskii; formerly Cricetulus bedfordiae), also known as the desert hamster or Robo dwarf hamster, is the smallest of three species of hamster in the genus Phodopus, averaging under 2 centimetres (0.8 in) at birth and 4.5–5 centimetres (1.8–2.0 in) and 20–25 grams (0.71–0.88 oz) during adulthood. Distinguishing characteristics of the Roborovskis are eyebrow-like white spots and the lack of any dorsal stripe (found on the other members of the genus Phodopus). The average lifespan for the Roborovski hamster is three years, though this is dependent on living conditions (extremes being four years in captivity and two in the wild). Roborovskis are known for their speed and have been said to run an equivalent of four human marathons each night on average.

Roborovski hamsters are found in desert regions, such as the basin of the lake Zaysan in Kazakhstan and regions of Tuva, Mongolia and Xinjiang in China. The hamsters inhabit areas of loose sand and sparse vegetation and are rarely found in areas of dense vegetation and solid clay substrates. They live at elevations of around 1,200 metres (3,900 ft)–1,450 metres (4,760 ft) and although research has been carried out, no fossil record exists for this species. Their efficient use of water makes them particularly suited to the steppe and desert regions they inhabit. They dig and live in burrows with steep tunnels as deep as six feet underground. In the wild, Roborovski hamsters are crepuscular, being most active at dawn and dusk.

The Roborovski hamster has been found to be more common in the southern area of its distribution range, in areas such as Yulin, Shaanxi, China. It has been reported as a common sighting by locals in this city and in the sand dunes of the Ordos desert.

They are omnivorous; they primarily eat grains, vegetables, fruit, and plants, but they will also eat meat and insects in small quantities. Roborovski hamsters remain underground in winter and survive in that season by stockpiling some food in warmer weather and storing it in special food chambers within their burrow system.

The Roborovski hamster mainly feeds on seeds. In Tuva it primarily lives on the seed of the sand alyssum, Nitre Bush, Siberian peashrub, Dracocephalum peregrinum, and milkvetch as well as sedges during the summer-months. Vegetative plant parts are not of significance.

In the Chinese province of Shaanxi it is known for foraging millet seeds.

In Mongolia, insects like beetles, earwigs and crickets are part of its diet. According to Formosow the stock of several burrows indicate an almost insect-based diet. Also the consumption of snails has been reported.

The daily dietary intake of the Roborovski hamsters heavily depends on its body weight. Juveniles have higher intakes of food compared to their weight than adult hamsters.

Pups, juveniles as well as adult hamsters are foraging food in their burrows.

The gestation period is between 20 and 22 days, producing three to four litters. The litter size is between three and nine, with an average of six. Captive bred Roborovski do often breed all year round.

The offspring weigh 1 gram (0.035 oz)–2.1 grams (0.074 oz) at birth. Upon being born, the offspring have no fur, the incisors and claws are visible, but the eyes, pinnae of the ear and digits are all sealed. After a period of three days, the whiskers become visible and after five days, the first dorsal hairs develop. The digits separate after six days and after eleven days, the body is completely formed. The young hamsters open their eyes by day 14 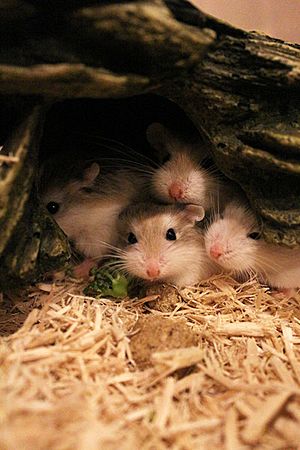 A group of young male Roborovski hamsters hiding in a small resin cave.

Roborovski hamsters have become increasingly popular as pets in recent years, however, they are best suited to life as merely observational creatures, with limited interaction between them and humans, due to their increased activity levels that lead to a high stress predisposition and decreased ease of handling when compared to other domestic hamster species. They are not recommended as pets for young children.

On average, Roborovski hamsters will live 26 months in captivity.

Although claimed to be hypoallergenic, Roborovski hamsters have been associated with the development of asthma in previously asymptomatic owners.

In rare emergency situations, a shallow dish of warm water may be necessary to clean harmful substances from a hamster's fur; however, under normal circumstances, hamsters should never be bathed in water as, aside from being incredibly stressful, this can remove vital protective oils from their coat, which can be very dangerous and potentially fatal. Hamsters frequently groom themselves, and instead of water, a sand bath should be offered to help them stay clean and healthy (See 'Bedding/Substrate' subsection for more information). 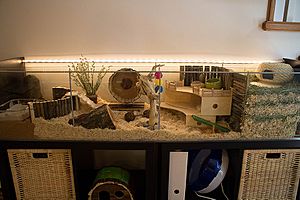 Unlike other species of hamster (see 'Golden hamster'), Roborovski hamsters can sometimes be kept in same-sex pairs or small groups if raised together from a young age. A lone, or pair of Roborovski hamsters should be kept in a cage ideally 50 x 100 cm, or the equivalent of 0.5sq metres with at least 15–20 cm of substrate, so that they may exercise their natural urge to burrow. However, greater floor space and substrate depth is recommended for all species of hamsters, where "bigger is always better" . Additional levels do not count toward the base area. Aquariums and DIY-enclosures are commonly used amongst hamster enthusiasts, often preferred for their capability to hold greater amounts of substrate, wide availability, and cost, amongst various other reasons, over their more traditional wire-cage counterparts (See images for examples).

If fighting within a group occurs, the hamsters should be separated immediately to avoid injury. 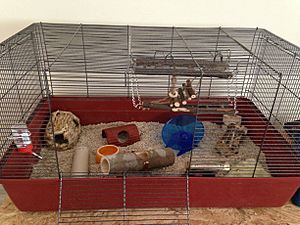 Roborovski hamsters are very active, so a species-appropriate wheel is a necessity. Size is still debated, however the general consensus is that a wheel should be no bigger than 16.5 cm (6.5 inches) because of their Robo hamsters are small and it will be hard for them to move a wheel much bigger. Other sources recommend a diameter of 20 cm(8 inches).

Roborovski hamsters, like many rodents, will naturally avoid large open spaces, opting to stick close to the walls if forced to cross one, where they feel safest. Providing them with multiple hiding spots is vital. This can be achieved by placing branches, tunnels and various other hides in close arrangement. 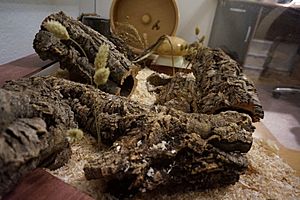 A good example of a Roborovski hamster enclosure, containing plenty of tunnels and hides.

Based on their natural diet, owners should feed hamster food containing mainly grains and small seeds. Animal protein should also be offered, in form of mealworms, grasshoppers or other insects. If you do not like to feed them alive, you can purchase dried insects. Some hamsters also accept seafood such as dried gammarus.

To support their natural behaviour of foraging and stockpiling, feed should be scattered around the enclosure, hidden in several spots, or slightly buried beneath the substrate (Approximately 1tsp of food per hamster per day).

Some unsuitable foods include:

Fresh water should be available at all times. A bowl is preferable to a bottle, as it encourages a more natural and comfortable drinking posture.

Hamsters' incisors never stop growing and they have a ‘self-sharpening’ system where the incisors grind against each other while gnawing, which wears the teeth down; so providing them with chew-toys is essential.

Materials that separate into thin strands, e.g. cotton wool or similar 'fluffy' bedding products, pose a serious risk to the health and welfare of hamsters, due to the possibility of entanglement or ingestion. Nesting material should be easily shredded and digestible, such as unscented toilet paper, moss, hay or leaves.

Softwood shavings (such as pine or cedar) are also unsuitable as they contain harmful chemicals which can damage the respiratory system of hamsters. Conversely, hardwood shavings such as aspen are perfectly safe to use.

To help mimic the Roborovski hamsters natural habitat, a large bowl of sand should be made available at all times. Chinchilla sand makes the best choice, but children's play sand may also be used. The sand must be dust-free. Bird sand is not suitable, because it contains sharp elements such as shards of broken shell. Dust bathing is a vital part of a hamster's daily routine and helps to keep their coat healthy and shiny by removing excess oils. The sand can be kept clean by sieving or washing out with water and drying.

All content from Kiddle encyclopedia articles (including the article images and facts) can be freely used under Attribution-ShareAlike license, unless stated otherwise. Cite this article:
Roborovski dwarf hamster Facts for Kids. Kiddle Encyclopedia.