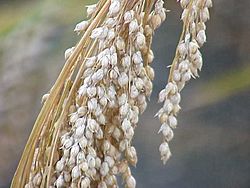 Millet is a type of grain that is eaten. There are many types of millet. Millets is fairly good nutrition. It includes three grams of protein per half serving and one gram of fiber per half serving. Six-tenths of a miligram is the amount of iron in each half serving of millet.

Millets also have high fiber content, and poor digestibility of nutrients. This limits their value in nutrition and makes them rather less acceptable to consumers. 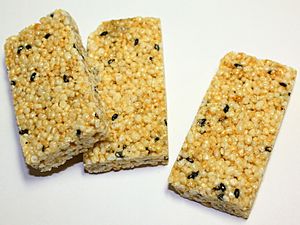 Awaokoshi, candied millet puffs, are a specialty of Osaka, Japan. This millet confection tradition began when it was presented to Sugawara no Michizane when he stopped in Naniwa during the early Heian period, about 1000 years ago.

Millets are major food sources in arid and semiarid regions of the world, and feature in the traditional cuisine of many others. In western India, sorghum (called jowar, jola, jonnalu, jwaarie, or jondhahlaa in Gujarati, Kannada, Telugu, Hindi and Marathi languages, respectively; mutthaari, kora, or panjappullu in Malayalam; or cholam in Tamil) has been commonly used with millet flour (called jowari in western India) for hundreds of years to make the local staple, hand-rolled (that is, made without a rolling pin) flat bread (rotla in Gujarati, bhakri in Marathi, or roti in other languages). Another cereal grain popularly used in rural areas and by poor people to consume as a staple in the form of roti. Other millets such as ragi (finger millet) in Karnataka, naachanie in Maharashtra, or kezhvaragu in Tamil, "ragulu" in Telugu, with the popular ragi rotti and Ragi mudde is a popular meal in Karnataka. Ragi, as it is popularly known, is dark in color like rye, but rougher in texture.

Millet porridge is a traditional food in Russian, German, and Chinese сuisines. In Russia, it is eaten sweet (with milk and sugar added at the end of the cooking process) or savoury with meat or vegetable stews. In China, it is eaten without milk or sugar, frequently with beans, sweet potato, and/or various types of squash. In Germany, it is also eaten sweet, boiled in water with apples added during the boiling process and honey added during the cooling process.

Per capita consumption of millets as food varies in different parts of the world with consumption being the highest in Western Africa. In the Sahel region, millet is estimated to account for about 35 percent of total cereal food consumption in Burkina Faso, Chad and the Gambia. In Mali and Senegal, millets constitute roughly 40 percent of total cereal food consumption per capita, while in Niger and arid Namibia it is over 65 percent (see mahangu). Other countries in Africa where millets are a significant food source include Ethiopia, Nigeria and Uganda. Millet is also an important food item for the population living in the drier parts of many other countries, especially in eastern and central Africa, and in the northern coastal countries of western Africa. In developing countries outside Africa, millet has local significance as a food in parts of some countries, such as China, India, Burma and North Korea.

The use of millets as food fell between the 1970s and the 2000s, both in urban and rural areas, as developing countries such as India have experienced rapid economic growth and witnessed a significant increase in per capita consumption of other cereals.

It is a common ingredient in seeded bread.

Millets are also used as bird and animal feed.

In addition to being used for seed, millet is also used as a grazing forage crop. Instead of letting the plant reach maturity it can be grazed by stock and is commonly used for sheep and cattle.

Millet is a C4 plant which means it has good water-use efficiency and utilizes high temperature and is therefore a summer crop. A C4 plant uses a different enzyme in photosynthesis from C3 plants and this is why it improves water efficiency.

In southern Australia millet is used as a summer quality pasture, utilizing warm temperatures and summer storms. Millet is frost sensitive and is sown after the frost period, once soil temperature has stabilised at 14 °C or more. It is sown at a shallow depth.

Millet grows rapidly and can be grazed 5–7 weeks after sowing, when it is 20–30 cm high. The highest feed value is from the young green leaf and shoots. The plant can quickly come to head, so it must be managed accordingly because as the plant matures the value and palatability of feed reduces.

The Japanese millets (Echinochloa esculenta) are considered the best for grazing and in particular Shirohie, a new variety of Japanese millet, is the best suited variety for grazing. This is due to a number of factors: it gives better regrowth and is later to mature compared to other Japanese millets; it is cheap – cost of seed is $2–$3 per kg and sowing rates are around 10 kg per hectare for dryland production; it is quick to establish; it can be grazed early; and it is suitable for both sheep and cattle.

Compared to forage sorghum, which is grown as an alternative grazing forage, animals gain weight faster on millet and it has better hay or silage potential, although it produces less dry matter. Lambs do better on millet compared to sorghum. Millet does not contain prussic acid which can be in sorghum. Prussic acid poisons animals by inhibiting oxygen utilisation by the cells and is transported in the blood around the body — ultimately the animal will die from asphyxia. There is no need for additional feed supplements such as Sulphur or salt blocks with millet.

The rapid growth of millet as a grazing crop allows flexibility in its use. Farmers can wait until sufficient late spring / summer moisture is present and then make use of it. It is ideally suited to irrigation where livestock finishing is required.

All content from Kiddle encyclopedia articles (including the article images and facts) can be freely used under Attribution-ShareAlike license, unless stated otherwise. Cite this article:
Millet Facts for Kids. Kiddle Encyclopedia.